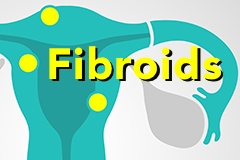 The National Institutes of Health has called fibroids in women a “hidden” epidemic. The late Rep. Stephanie Tubs Jones, the first black woman to represent Ohio in Congress, called uterine fibroids a “silent epidemic” that seems to affect black women more severely that their white peers.

“Certainly, women who suffer the symptoms of fibroids tell me about their pain, uterine bleeding and feeling of pelvic pressure,” says McLeod Gynecologist Gary Emerson, MD. “Yet, despite about one quarter of American women of child-bearing age having these noncancerous growths in, on or around their uterus, only about 20% have the life-troubling symptoms of fibroids.”

On the positive side, fibroids are almost always not a sign of cancer and usually prevent no symptoms for women. Some women with fibroids the size of a grapefruit have no symptoms. Only 0.5% of fibroids are cancerous.

On the other side, women with even small fibroids can experience severe pain and other symptoms.

The “silent” and “hidden” epidemic may also apply to the long delays women impose on themselves after beginning to experience pelvic pain, heavy uterine bleeding and incontinence. Women with symptoms wait about 3.5 years until seeking treatment and about a third of women wait 5 years. In one study, women said they were concerned about missing work or fear of not realizing their career potential.

The range of treatments for fibroids has expanded continually over the years, many of them nonsurgical or minimally invasive.

Many physicians start with medication for pain or some hormone therapy, such a birth control pills to control the bleeding.

The next step would be focus ultrasound to heat and destroy the fibroids or uterine fibroid embolization using small particles to block the arteries feeding the fibroids, causing them to shrink.

ACTIONS YOU CAN TAKE

If you are experiencing the symptoms of fibroids, call for an appointment to see your Gynecologist. Confirming a diagnosis can often be accomplished with a simple vaginal exam or ultrasound.

Your Gynecologist can discuss your options and together you can decide the best treatment for you.

Here is a checklist to help you prepare for a visit with the Gynecologist about your pelvic health issue.