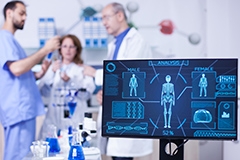 A cancer diagnosis never represents good news. Yet, with advances in diagnosis and treatment, many cancers are treated more like chronic conditions, such as diabetes, than the acute catastrophic cancers of the past.

“While people will still develop cancer, the outlook for treating and controlling or even curing it has never been so bright,” says McLeod Oncologist Dr. Ravneet Bajwa. “To understand how far we’ve come, it’s enlightening to look back at the history of cancer treatments.”

1882.  The first radical mastectomy to remove breast cancer was performed. Over time less invasive procedures were found to be equally effective.

1891.  In an early attempt at immunotherapy, toxins from a skin infection triggered the body’s immune system to fight rare connective tissue sarcomas. However, it was not until 1958 that chemotherapy successfully treated uterine sarcoma.

1898.  The discovery of radium leads to the first cancer treated with radiation therapy just before the close of the 19th century. In 1903, two patients treated with radium saw their skin cancer eliminated.

1946. Chemicals from mustard gas, used in World War I chemical warfare, could be used to treat certain cancers.

1960s. Researchers confirmed that therapies given in addition to the primary treatment improved the ultimate outcome. So-called adjuvant therapy generally describes the use of radiation or chemotherapy given before surgery.

1982. A  patient with lymphoma (cancer which begins in the immune system) improved after treatment with monoclonal antibodies, lab-produced components that can “unlock” the immune system so it can destroy the tumor.

1990. The last decade of the 20th century saw advances in targeted therapy, where specific cells are targeted with chemotherapy.

1994. Mutations of the BRCA1 gene are confirmed as increasing the risk of breast and ovarian cancers.

In the 21st century, we’ve witnessed a stream of developments:

AND MORE TO COME
Each discovery, clinical trial or approval generates more hope for successful prevention, diagnosis or treatment that results in more cancer survivors.