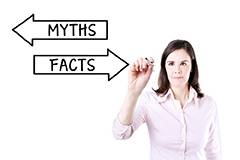 “We know the problem is caused when the endometrium — blood and tissue that is normally shed monthly from the uterus — starts to grow outside the uterus,” says McLeod Gynecologist Rebecca Craig, MD. “Yet, there’s still much we have to learn endometriosis.”

The cause of endometriosis seems elusive and possibly involves a variety of interrelated factors. Over the years, a number of wives’ tales or myths grew up around this troublesome women’s health issue. To help your understanding, here are a few myths and the reality.

Myth #1
It’s NORMAL to have pain during your period so severe that it limits your life.

REALITY: It is NOT normal. The pain may be caused by endometriosis or a number of other problems. See your Gynecologist to determine the root of your pain.

Myth #2
Women with endometriosis ONLY suffer pain during their period.

REALITY: There is pain, but when you hurt and how much are not always accurate indicators. Pain from this problem can be intermittent or ongoing. Sometimes it occurs during or after sexual activity. It can occur before or after a woman’s period. Some women with only small growths feel harsh pain. Other women with extensive growths have only minor pain.

Myth #3
Women with endometriosis have to live with HEAVY PERIODS.

REALITY: Women with endometriosis light periods, as well as heavy ones. A condition related to endometriosis – adenomyosis – is more likely to cause heavy periods.

REALITY: Up to the 1970s, physicians believed that the problem only troubled women in their 30s and 40s, because those were the patients most likely to have surgery. Over the last 40 years, as Gynecologists were able to more clearly view inside a woman’s body using the laparoscope, younger and younger women were diagnosed with endometriosis. A more recent global study of women’s health discovered that two-thirds of women seek help for endometriosis before age 30. In fact, many teens suffer symptoms when they start menstruation.

Myth #5
Endometriosis is most common among Caucasian women between 20 and 40.

REALITY: Through the mid- to late- 20th century, it was thought that the problem existed only in white women. This turned out to be a result of a lack of ongoing medical care for many African-American women. Today, Gynecologists understand that any women, any race, teen or older can experience the pain of endometriosis.

Myth #6
Endometriosis puts an end your plans for pregnancy.

REALITY: Endometriosis and its treatments can hurt a woman’s chances of getting pregnant. Yet, up to 80% of women with mild endometriosis can get pregnant.

REALITY: Some women report not suffering any further endometriosis after pregnancy. Pregnancy, as well as hormonal drug treatments, can trigger a temporary reduction in symptoms. However, the majority of women suffering from endometriosis so report continuing post-pregnancy problems.

REALITY: Gynecologists, using laparoscopic minimally invasive surgery, can remove the wayward tissue. However, it can grow back or in appear other places in your body.

This leads us to the other side of the coin. In this case, the TRUTH is not necessarily good news.

However, there are treatments that can control or eliminate the pain for some period of time.

Truth #2
Endometriosis is NOT something you outgrow.

Menopause may or may not help some of the symptoms of endometriosis. If you suffer from the symptoms, don’t delay in seeing your Gynecologist.