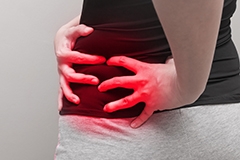 When heavy menstrual flow or bleeding that’s not associated with your monthly period intrudes, keeping you from regular daily activities, it’s time to see your Gynecologist.

“We’ll help answer two questions,” says McLeod Gynecologist Gary Emerson, MD. “First, we need to find the cause of your bleeding. Then, we need to determine how to treat the problem. We’ll usually start with medication. If that doesn’t work, we often turn to endometrial ablation for treatment.”

Your uterus has two layers. The outer layer is called myometrium. The inner layer, the endometrium, thickens once a month preparing to accept a fertilized egg. If a fertilized egg doesn’t show up, the lining breaks down and bleeding results. Bleeding usually stops when the uterus sheds its lining,

STOPPING THE BLEEDING
In the past, a hysterectomy – complete removal of the uterus – was the only way to stop the bleeding. Advances in surgical techniques and technology now enable your Gynecologist to treat the problem in a much less invasive way.

To stop the bleeding, your Gynecologist gently inserts a narrow tube, called a hysteroscope, through the vagina and cervix into the uterus. A video camera in the tube transmits an image to a video screen by the physician. Then, the Gynecologist uses one of a number of options to destroy the lining of the uterus to reduce or eliminate the bleeding.

The procedure can be performed under local or general anesthetic and only rarely requires an overnight stay.

AFTER ABLATION
After treatment, the lining of your uterus heals by scarring. You may feel some menstrual-type cramps for a day or two after the procedure. You might experience some nausea. For a few weeks, you might see a thin, watery discharge possibly mixed with blood. This will eventually disappear as the endometrium heals.

About 40% of women stop menstruation completely. Some 90% experience significantly reduced bleeding. In most women, pregnancy isn’t likely or recommended after ablation.

ACTION YOU CAN TAKE
If you experience what you feel is excessive bleeding, talk with your Gynecologist. Medicine or the endometrial ablation may help.

You’ll still have all your reproductive organs and will need routine cervical cancer screenings and pelvic exams.