Easing the Side Effects of Prostate Cancer Radiation Treatment 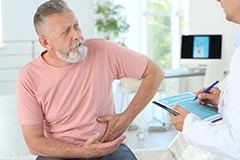 Advances in highly targeted radiation treatment give men greater hope for survival from prostate cancer than ever before. Yet, because the prostate is right next to the rectum radiation can affect the bowel, urinary and sexual function. But, a new development is changing all that.

“We can now inject hydrogel between the prostate gland and the rectum,” says McLeod Radiation Oncologist Dr. Larry Grubb. “This gel, which is mostly water, moves the rectum away from the prostate, and away from the radiation that might cause troublesome side effects.”

The McLeod Center for Cancer Treatment and Research saw success in its early use of the hydrogel with selected patients and expanded its use to a more standard procedure.

The inert gel is injected during an outpatient visit before the radiation treatments start. Patients tolerate the procedure well with a very low number of side effects.

The gel separates the prostate and rectum, offering protection for about three months. Several months after radiation treatments end, the gel spacer is absorbed into the body. Hydrogel is comprised of the same elements used previously as surgical sealants in eye, brain and spine procedures.