D&C: What You Need to Know 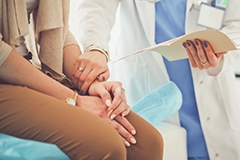 D&C – Dilation and Curettage – stands as one of the most common procedures that Gynecologists perform.  For that reason alone, it’s best to know more about the procedure.

“D&C enables us to collect tissue from the inside of the uterus for diagnosing or treating numerous conditions,” says McLeod Gynecologist [Physician Name, MD/DO]. “We can perform the procedure in the hospital or in the office under general or local anesthetic. Dilation describes a widening of a woman’s cervix to allow instruments to enter uterus.  Curettage describes the act of removing or scraping tissue from the walls of the uterus.”

Diagnosis
In many cases, the Gynecologist will attempt an endometrial biopsy, an in-office procedure, to obtain a tissue sample.  D&C may also be preceded by or in combination with another procedure called hysteroscopy to look inside and capture images of the uterus.

Removal of uterine tissue enables lab analysis to eliminate possible causes of heavy bleeding. D&C is often used to rule out conditions, such as uterine cancer.

The removed tissue is often examined microscopically by a pathologist to confirm the presence of polyps, look for pre-cancerous cells in the uterus lining or determine the presence of uterine cancer.

Treatment
A D&C is one of the fastest ways to stop active bleeding in the uterus.  This includes:

D&C might also be recommended for taking out an embedded IUD birth control device, removing endometrial polyps and fibroids or treating a thickening of the uterus wall.

The D&C is usually very safe. However, as with a procedure there are some risks, which your Gynecologist will explain.

For several days after the procedure, a woman may experience some vaginal bleeding, back pain or pelvic cramps.  The cramps and back pain can be treated with over-the-counter medications, such as ibuprofen.

ACTION YOU CAN TAKE
Don’t suffer needlessly from unexplained vaginal bleeding.  See your Gynecologist to determine the cause and discuss treatment options to correct your problem.

Find an OB/GYN Near you.