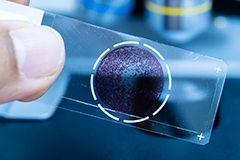 When a woman’s Gynecologist tells her that her Cervical Screening Pap Test is abnormal, the GYN may suggest another Pap or recommend a Cone Biopsy.

“The cone biopsy, also called conization, involves removing a small piece of tissues from the cervix,” says McLeod Gynecologist Michael Hoffman, MD. “As the term describes, a cone-shaped piece of tissue is sent to the lab for examination to determine if the cells show signs of disease. Abnormal cells may appear on the surface or in the cervix.  If the cone biopsy removes all the abnormal tissue, no other treatment may be needed. However, left untreated, the abnormal cells might develop into cervical cancer.”

The cone biopsy usually requires a general anesthetic and a short hospital stay. Often, you can go home the next day.

Several options exist for removing the biopsy.  Most common techniques include the so-called cold knife cone biopsy using a scalpel, a laser knife or the Loop Electrosurgical Excision Procedure (LEEP).

AFTER THE CONE BIOPSY

For a few days to a week, you may have some discomfort or cramping. Research shows that a cone biopsy won’t hurt a woman’s chances of getting pregnant, but may increase the possibility of a premature birth.

RESULTS OF THE BIOPSY

At this point, your Gynecologist may recommend other tests and, depending on the outcome of those tests, you may be referred to a cancer specialist.

1)    See your Gyn for your regularly scheduled Pap Test

2)     If you experience troubling symptoms, see your Gyn. Don’t panic. It may be a less critical problem, which can be treated with antibiotics and other medications.