Children — of ALL ages — Need to be Immunized 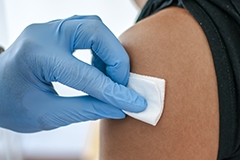 Most parents are very familiar with the vaccines required in the first several years of their child’s life, and those have been quite successful in preventing serious illnesses. However, just as important is offering vaccines to our older children and adolescents.

“Many of the terrible diseases of the past like diphtheria and polio have been eliminated by the use of vaccines,” says McLeod Family  Medicine Physician Frank Moskos, MD.  “The number of children infected with diseases such as pneumonia and meningitis has decreased over the last 20 years through vaccine technology, and some forms of one of the most dreaded diseases, cancer, are even being eliminated.“

Today, infants are vaccinated for many of the diseases that were once very harmful to babies. A vaccine for Hepatitis B is given at birth, as well as other vaccines periodically throughout the first year. Hepatitis B was a common infection of the liver in the past and a cause of liver failure and even liver cancer. Babies’ immune systems are not fully functional, so the vaccines to bacteria like Strep and Heamophilus, and viruses like influenza and polio prevent children from becoming severely ill from these diseases. Once, deadly diseases like epiglottis (a condition where the child’s airway would swell closed) was common, but is less so now due to the use of vaccines. And, polio, a terrible disease that can paralyze children, is nearly eradicated due to vaccinations.

Toddlers need vaccines for Measles, Mumps and Rubella, as well as Hepatitis A. There have been recent outbreaks in several of these diseases, some of which occurred in healthy, unvaccinated children. Measles is typically thought of as being a benign childhood disease, but Measles currently has no treatment and can lead to hospitalization and even death. Measles can also lead to a severe and fatal disease in the survivors of the disease, years after recovery. Mumps and Rubella are not quite as severe, but unfortunately there are no treatments once the child has been infected, and these diseases can also lead to problems years after the infection.

Several changes have happened with vaccinations in older children. Whereas this group was once largely forgotten, now there is more emphasis in properly immunizing adolescents. Multiple doses of a vaccine to prevent one of the deadlier diseases, meningitis, are now recommended. Adolescents who are heading to college or to military service can be infected with this bacteria, but the vaccine can be lifesaving.

It is also recommended that both boys and girls receive vaccination for HPV (also known as human papilloma virus). This vaccine has been advertised frequently on TV. It is valuable information and bears consideration. If children are vaccinated by 15 years of age, they can form a very good immunity to HPV. This is important, because HPV is the virus implicated in a variety of cancers, such as cervical and head and neck cancer. Finally, offering influenza and tetanus are important as these diseases still effect older children, and are highly recommended prior to international travel.

ACTiON YOU CAN TAKE

Medicine is changing rapidly, and the knowledge of healthcare professionals is evolving. There was a time that it would have been unthinkable to imagine a virus could cause cancer, let alone to think a vaccine could be administered to prevent these dreaded diseases. This is now a fact, certain forms of cancer can be prevented. Some people have asserted that vaccines weaken the immune system or even give individuals the disease, but the fact is that vaccines strengthen the immune system to fight off diseases that would have historically killed people.

Every parent should consult with their physician about the vaccinations their child needs to receive. Stay on target for all scheduled vaccinations, as they just may save your child’s life.