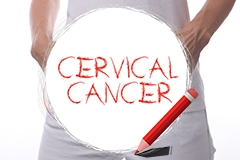 Following the recommended schedule, Pap tests during a woman’s visit to her OB/GYN exemplify the best method of screening for early signs of what may become cervical cancer. Occasionally an abnormal Pap test leads to further testing, including X-rays, CT, MRI, PET Scans or procedures, such as a colposcopy or a biopsy to sample the tissues for laboratory testing.

“The cervix sits at the opening to a woman’s uterus and most cervical cancers result from a human papilloma virus (HPV) infection produced from intimate contact,” says McLeod Oncologist Dr. Rajesh Bajaj. “Cervical cancer can take three to seven years to fully develop, reflecting the importance of regular screening to spot the abnormal cells in a pre-cancerous stage. Treatment involves some combination of surgery, radiation and chemotherapy.”

PREVENTION
Cervical cancer is highly detectable via routine Pap smears which supports the importance of regular screening. Annual screening provides detection at early stages, which allows for curative intent treatment. However, unlike any other cancer to date, cervical cancer can be completely prevented with the appropriate administration of the HPV vaccination. For complete efficacy, it is recommended for the vaccination to be administered in boys and girls prior to any exposure to the virus.  The American Cancer Society has detailed recommendations for the administration schedule of the vaccine to maximize effectiveness. With the appropriate administration of the vaccination, cervical cancer is the one cancer physicians should never have to treat.

SURGERY
Found early enough, the abnormal precancerous cells are removed using the same approach as a biopsy. Other minor procedures include LEEP, a thin wire loop that removes abnormal tissue when electrical current passes through the loop.

Some women may require a hysterectomy that includes removal of the uterus, cervix and, occasionally, the vagina.

RADIATION
Surgery might be followed with radiation therapy or, if cancer is in its early stage, radiation may be used instead of surgery. Two types of radiation therapy are external beam and brachytherapy. As the name implies, external beam therapy sends radiation beams from a machine outside the body and uses a computer to aim the beam into the body and calculate the strength for the best outcomes. With brachytherapy, small capsules of radioactive material are inserted into the body, enabling a greater dose of radiation to be targeted at a smaller area.

CHEMOTHERAPY
When cervical cancer is identified in its early stages, a combination of low-dose chemotherapy and radiation might be the recommended treatment. Patients generally receive chemotherapy through intravenous (IV) treatments, designed to increase the radiation’s effectiveness.

If the cervical cancer spreads beyond the cervix (metastasizes), a platinum-based combination therapy involving a targeted drug called bevacizumab (Avastin) may be employed to extend a woman’s survival.

ACTION YOU CAN TAKE
You can help prevent cervical cancer by stopping smoking, getting regularly recommended Pap tests and asking your primary care physician or OB/GYN about the HPV vaccine.