Broken Heart Syndrome is Real – But Not What You Think 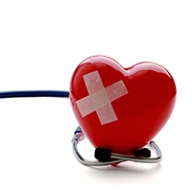 From an interview with
Dr. Fred Krainin
McLeod Cardiology Associates

“This is a fascinating topic, but we are not talking about that time in high school when your girlfriend broke up with you and you moped around for a week or two,” says McLeod Interventional Cardiologist Dr. Fred Krainin. “The Broken Heart Syndrome that I’m talking about is a real clinical entity and it is a relatively new disorder with the formal name of Takotsubo cardiomyopathy.”

BACKGROUND
Takotsubo is the Japanese word for octopus pot. When a Japanese fisherman goes out to try and catch an octopus, he uses a trap, which is narrow at the neck and balloons at the closed base. The octopus swims into this pot at the top and he can’t get out.

What does that have to do with the heart? Well, it turns out that’s exactly what the heart looks like in Takotsubo cardiomyopathy. It’s narrow at the top of the heart but widens at the bottom. Symptoms appear abruptly when the heart tries to squeeze the blood back out the narrow opening at the top. One theory is that the brain senses something stressful and releases Catecholamines (hormones made by your adrenal glands), stunning the heart muscle. 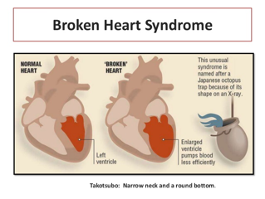 NOT SO RARE
“When it was first described a couple decades ago, the condition was originally thought to be extremely rare,” says Dr. Krainin. “But I saw a woman last week who had Takotsubo or Broken Heart Syndrome and I probably see a patient every other month or so. So, it’s really not rare, but relatively common.”

SYMPTOMS
The symptoms are identical to a heart attack with the most common symptom of chest pain. Other symptoms include shortness of breath, dizziness and passing out. So, there’s no way to tell the difference between Takotsubo and your garden variety heart attack or cardiac chest pain.

DIAGNOSIS
An echocardiogram or ultrasound test of the heart would show the ballooning or the octopus pot. Another way is to perform a heart catheterization or an angiogram. If the coronary arteries look clean, there’s no blockages to explain a heart attack. By taking a picture of the heart muscle using dye, we could see again that typical classic ballooning at the bottom of the heart and narrow at the top.

TREATMENT
We treat patients with the same medications used for heart attack treatment.  While about five percent of Takotsubo cardiomyopathy patients can be very serious, the good news is that most survive and, within 21 days, the heart muscle returns to normal. So typically, we will see these patients back in the office in about a month. We’ll get another echocardiogram and find that their heart muscle has completely healed up.

ACTION YOU CAN TAKE
Whether it’s broken heart syndrome or a regular heart attack, don’t mess around. If you have unexplained or unrelieved chest pain, call 911. Go immediately to the emergency department.