Bleeding After Menopause.
Don’t Wait to See Your Doctor 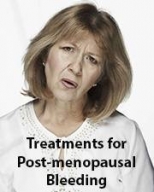 “I’m glad you called right away,” Mary’s OB/GYN assured her. Mary was surprised when she started bleeding because she thought when her menopause ended 5 years ago, her bleeding was over, too. Recently, Mary started spotting or light bleeding. Then, the bleeding grew heavier and she again needed to wear pads.

“The formal name for Mary’s situation is Postmenopausal Bleeding,” says McLeod OB/GYN Brad Campbell, M.D. “About 10% of women over age 55 will experience the problem. Most causes are benign. However, 1 out of 10 women who start to bleed more than a year after their menopause had ended, will face endometrial cancer. It’s important to see your OB/GYN right away to find out the actual cause and possible treatments.”

With menopause, levels of the hormone estrogen drops, causing the blood vessels in the uterus to become fragile, break and bleed. This weakening or atrophy accounts for the bleeding in about 60% of the women who suffer bleeding after menopause. Other common causes include:

Physicians may use a vaginal ultrasound, directly view the tissue with a camera on a thin tube (hysteroscopy), or take a tissue sample (biopsy) with the hysteroscope or using a D&C (a common GYN procedure).

For polyps and fibroids, surgery may be needed. Both can be removed through the vagina or with small incisions. Patients usually go home the same or next day.

Hyperplasia can be treated with progestin hormone therapy. Thickened areas can be removed with a hysteroscopy or D&C.

If the diagnosis is cancer, a hysterectomy is the treatment of choice. The surgeon may also remove lymph nodes to prevent the cancer from spreading further.

Although postmenopausal bleeding can be serious, most causes are benign and can be treated easily. It’s best to follow Mary’s example and see your OB/GYN if you see evidence of bleeding a year or more after you believe your menopause has ended.