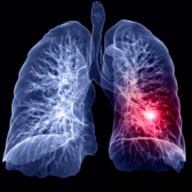 Low-dose CT scans can now detect small, early-stage, potentially curable lung tumors. Results of a trial with more than 53,000 former or active smokers showed a low-dose CT scan of the chest was better than a chest X-ray for detecting early lung cancer.

This is the biggest advancement in lung cancer detection for more than 25 years. Some 90% or more of all lung cancers are caused by cigarette smoking, according to the Centers for Disease Control and Prevention (CDC). The risk of developing lung cancer for a current smoker with a history of smoking a pack a day for 40 years is about 20 times higher than that of the non-smoker.

As with most cancers, early detection remains the key to survival. Early-stage lung cancer patients often do not have symptoms and can go for months and potentially years without detection.

Until recently, there were not reasonable tests for early detection because the tumors are not always visible on a chest X-ray. Historically, a patient would not be diagnosed with lung cancer until they developed symptoms, such as coughing up blood, unintentional weight loss, or shortness of breath.

The Screening Guidelines followed by McLeod Health include:

Learn more about the Lung Cancer Screening Program or call the McLeod Healthy Lung Initiative at 843-777-5953.