5 Weird Heart Risks You May Not Know About 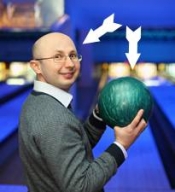 Baldness. Earlobes. Airports. Bowling Alleys. Breakfast. Yes, real scientific studies have shown that these 5 things are related to your risk of heart and vascular disease.  Here are some fun facts that have a serious side.

Baldness.  As if it wasn’t bad enough that a guy has to lose the hair on his head, a study has found that men with frontal baldness are 9% more likely to have heart disease than hair-headed men. Even worse, men with male pattern baldness at the top of their heads are 23-36% more likely to have heart disease. The good news: another study by the University of Arizona found that baldness all by itself was not a reliable indicator.

Earlobes.  Look in the mirror to see if you have a line running diagonally from the bottom of the ear opening to the ear’s lower tip.  This is the Earlobe Crease, or in scientific speak “ELC.” Studies in four different countries have found that there is a connection between people with ELCs and increased risk for coronary artery disease. In fact, one study found the link between ELCs and heart disease was greater than family history or smoking.

So much for risk factors you can’t control. Here are 3 you can:

Airport noise has been linked to stroke and heart disease. The British Medical Journal reported that heart risks were 10-20% higher in people subjected to the highest levels of airport noise. Some believe the “startle reaction” upon sudden exposure to the noise triggers higher heart rates and blood pressure.

People, who get their exercise through bowling, are more likely to survive a heart stoppage than if they have the attack at the gym.  Yes, hard to believe.  Only 56% of the victims at the gym survived, compared to 34% surviving at other indoor locations.  Ironically, 45% of the victims who suffered their heart stoppage at a bowling alley survived. (The research did not indicate if the pizza and beer at the bowling alley was a factor.) On the serious side, the data has serious implications on the need for the availability of automatic defibrillators in public locations to get hearts pumping quickly.

Don’t skip breakfast, concludes a researcher involved in this study of the Harvard School of Public Health.  The morning meal has long been promoted for helping weight loss to improving student’s focus in the classroom.  A 16-year study of 27,000 men revealed that men who routinely skipped breakfast have a 27% higher risk of heart attack or dying from coronary artery disease than those breakfast eaters.

A Final Serious Thought. “Some of the risks highlighted in this article may seem humorous,” says McLeod Cardiologist Dr. Anil Om. “However, we need to understand that there are some risks a person CAN’T control, but many more that they CAN and SHOULD control to live a longer, healthier life. Among the most important: Stop Smoking. Exercise. And eat wisely.”