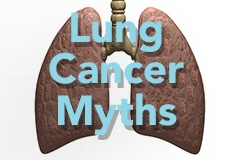 “Lung cancer is the most common cancer worldwide,” says McLeod Pulmonologist Vinod Jona, MD. “It is also the second most common type of cancer disease (next to breast cancer) that we see in this region of South Carolina.”

Despite being so common, lung cancer is surrounded by a cloud of misunderstandings and myths.  Let’s try to clarify a few:

Myth: As a woman I’m not going to worry about lung cancer. More women die from breast cancer than lung cancer.

TRUTH: Almost half the cases of lung cancer are in women.  And more women die from lung cancer than any other form of the disease. Over the past 30 years, the rate of lung cancer in men has declined, while the rate for women has risen more than 100%. As a result of the National Lung Screening Trial, low dose CT screening is currently recommended for people between ages 55 and 74 who have 1) smoked a pack a day for 30 years or 2) quit less than 15 years ago.

TRUTH:  Lung cancer is survivable.  With surgery, chemotherapy and radiation, lives are extended and the symptoms caused by lung cancer are decreased.  The key to survival is discovering the cancer while it is still in its early stages.  Look for these symptoms:

Myth: If I don’t smoke, I don’t have to worry about lung cancer.

TRUTH: There is NO DOUBT: Smoking does contribute to most lung cancer cases.  However, 15% of people who are diagnosed with lung cancer have NEVER smoked.

TRUTH:  The devices turn nicotine and other chemicals into a smoke-like vapor that the user inhales. The devices do not burn so there’s no tar. However, they do contain a number of chemicals, including the addictive nicotine as well as diethylene glycol, a toxic ingredient found in antifreeze.  The US Food and Drug Administration cannot regulate the products, because they do not technically contain tobacco.  Research on the long-term effects of e-cigarettes continues.  Scientists have identified short-term negative effects on breathing and the lungs that mirror cigarettes’ impact.

Myth: If I have lung cancer, there’s no use in quitting smoking now.

TRUTH:  The effects of quitting smoking – even AFTER you’ve been diagnosed are dramatic. People with early stage lung cancer can double their survival chances if they quit smoking after being diagnosed. Quitting raises the success rate of surgery and makes treatment more effective. Within 2 to 3 weeks of quitting smoking, the patient’s circulation improves, walking becomes easier and lung function increases. By quitting, you’re also decreasing your chances of suffering stroke, heart disease and other cancers.

Final Thought.
Lung Cancer is a dangerous form of the disease. Do not hesitate to see your doctor if you have any of these symptoms.