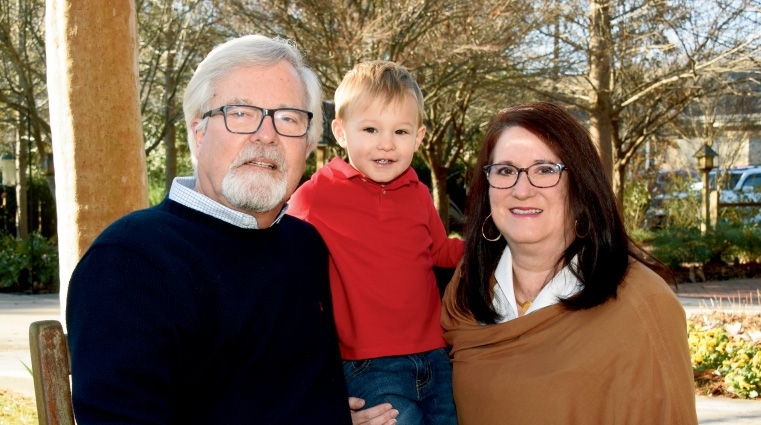 Making Lives Brighter in Our Region

Bill and Mindy Taylor know firsthand the importance of having a local Children’s Hospital in the region.

The couple recall the day they visited McLeod Children’s Hospital to meet their grandson, John Luke Iseman. John Luke was a healthy full-term baby, but several hours after his birth, his blood sugar dropped. He was rushed to the McLeod Neonatal Intensive Care Unit (NICU).

Bill and Mindy saw the fear their son and daughter-in-law experienced when staff took John Luke from their arms. It was the same anxiety Bill felt 39 years ago when his daughter, Olivia, had to be treated in the McLeod NICU.

“When Olivia was born, I was not prepared for the NICU,” Bill said. “I was unable to hold her for two weeks. But, I knew that my little girl was receiving the best care possible. The doctors and staff were just fantastic.”

Bill and Mindy encouraged their son and daughter-in-law, helping them understand that John Luke would receive excellent, state-of-the-art care.

And, they were right. Today, John Luke is an active two-year-old and the light of their lives. The Taylors know the value of McLeod Children’s Hospital more than most having had a daughter, and now a grandson, receive life-saving care from the McLeod NICU.

While the two have become generous supporters of McLeod Children’s Hospital -- both personally and through Mindy’s employer, Duke Energy -- they are quick to point out that they are not simply “donating” to a cause.

“I tell everyone that we are not just donating money; we are investing in the community,” Mindy explained. “But, when it becomes very personal, as it did for us, that is when you can really see the fruits of your investments.”

The Taylor family will always be grateful to McLeod Health Foundation donors who have also invested in excellent local care for children like Olivia and John Luke.

Mindy added, “We are so fortunate to have McLeod as a regional medical system. What would we do without them?”