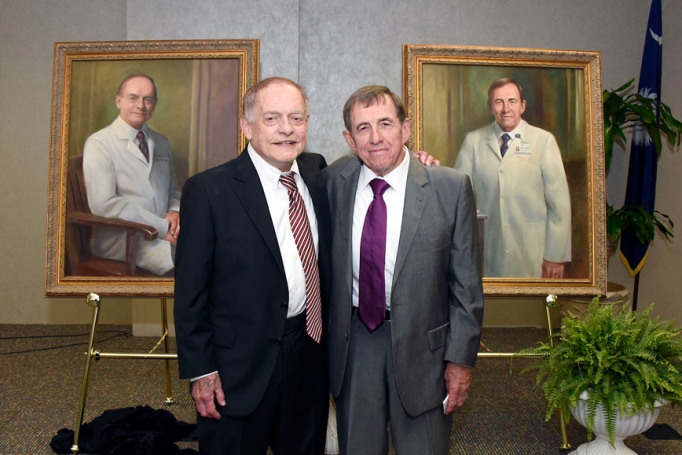 Dr. E. Conyers O’Bryan, Jr., at left, poses for a picture with his colleague Dr. Reginald S. Bolick, in front of their portraits that were unveiled on Doctors’ Day at the McLeod Medical Plaza.

In celebration of their years of dedication and service to others, McLeod Health held a portrait unveiling to honor two outstanding physicians on National Doctors’ Day.

The portrait unveiling for Dr. E. Conyers O’Bryan, Jr., and Dr. Reginald S. Bolick was held on March 30 in the McLeod Medical Plaza Conference Center. Family members, colleagues and friends were in attendance to honor the two men.

Prior to the unveiling of Dr. O’Bryan’s portrait, Daphne Bazen-Heffler and Dr. Louis D. Wright, Jr., reflected on Dr. O’Bryan’s career at McLeod and his contributions to cardiology and the teaching of nurses.

Dr. Bolick was honored prior to the unveiling of his portrait by Marie Saleeby and Dr. Joseph M. Pearson, Jr., who shared details on his role as a surgeon and mentor at McLeod.

Rob Colones, President and CEO of McLeod Health, provided the welcome and invocation to begin the ceremony. He was followed by Dr. C. Dale Lusk, Chief Medical Officer and Vice President of Medical Services, who offered opening remarks on the two honorees and the recognition of this event being held on Doctors’ Day.

John R. Braddy, Chairman of the McLeod Health Board of Trustees, provided the closing remarks saying, “McLeod has a long-standing tradition of acknowledging the lifetime achievements of McLeod Physicians, Nurses, Healthcare Professionals and Administrative/Board of Trustees Leadership. One of the most significant opportunities for recognizing meritorious service and paying tribute to the fine character of these individuals is through the act of commissioning a portrait in their honor. The artist’s beautiful rendering of these individuals are placed on permanent display, showcased in perpetuity for generations to come, along with a bronze plaque highlighting their extraordinary work.

“We recognize the service excellence and outstanding contributions of Dr. Bolick and Dr. O’Bryan. They are indeed role models for caring, quality, excellence and integrity in the provision of medical care. They have demonstrated a commitment to the mentoring, education and encouragement of fellow staff and supported the advancement of medical care, treatment and research at McLeod,” added Braddy.

Dr. O’Bryan, recognized by his commitment to excellence and his outstanding community contributions, served in a physician leadership role with McLeod Health for more than 50 years. He completed medical school at the Medical University of South Carolina (MUSC) in Charleston and then served as a Medical Officer in the United States Marines before returning to MUSC to complete his residency and fellowship. A native of Florence and a founding partner of Florence Diagnostic Associates, Dr. O’Bryan moved back to Florence in 1966 and soon helped establish the region’s only Cardiac Care Unit at McLeod. His work and collaboration with others raised the bar for diagnostic and treatment of the heart in the region, advancing these services into a full Cardiac program, leading to the first Open Heart Surgery case in 1986 at McLeod. A dedicated member of the private practice in the specialty of internal medicine and treatment of cardiovascular disease at Florence Diagnostic Associates, Dr. O’Bryan held a full clinical professorship at MUSC and served on the MUSC Board of Trustees since 1976 as the medical profession representative from the Seventh Congressional District. He also served as Chair of that Board from 1994 to 1998; re-elected as Chair in 2000. Additionally, Dr. O’Bryan served as the Chief of Staff for McLeod Regional Medical Center in 1978-1979. In the community, he has served on the Board of Directors of the Kiwanis Club, the Big Brother Association, the American Heart Association and the Florence Family YMCA. In 1995, Dr. O’Bryan was awarded the coveted Order of the Palmetto, presented by the Governor of South Carolina. He has also been recognized as a Distinguished Alumnus of MUSC and South Carolina Physician of the Year.

A native of Maiden, North Carolina, Dr. Bolick moved to Florence in 1975 after completing medical school at Bowman Grey School of Medicine in Winston-Salem, North Carolina, and a surgical residency at the University of Kentucky Medical Center in Lexington. He also served two years (1970-1972) in the United States Army Medical Corps. Board certified by the American Board of Surgeons since 1976, he is also a member of the Fellow of the American College of Surgeons and the American Society of Laparoscopic Surgeons. Dr. Bolick cared for patients at Pee Dee Surgical Group and McLeod Health for more than 40 years. During that time, he witnessed enormous changes in his practice and the medical field in general. Dr. Bolick began surgery with McLeod in the mid-1970s as a part of Florence Surgical Associates. In 1986, Dr. Bolick and Dr. Joseph Pearson established Pee Dee Surgical Associates which later transitioned into Pee Dee Surgical Group. Because of their great insight and desire for the best in surgical care, the surgeons were the first in the area to offer breast conservation for the treatment of breast cancer. In 1990, they also began performing the minimally invasive laparoscopic cholecystectomy to remove gallbladders. During his medical career, Dr. Bolick specialized in general surgery, laparoscopic surgery, endocrine surgery and cancer surgery. He was also honored in 2007 with the McLeod Merit Award by his fellow hospital staff members for being caring and compassionate with patients, families and staff. Even after his retirement in 2016, he continues to serve patients in rural hospital assignments and the international mission field, particularly as a teaching physician in the Ukraine and China. Dr. Bolick is often recognized for his compassion, nurturing, superlative skills and knowledge, excellence in surgery and high standards in quality.