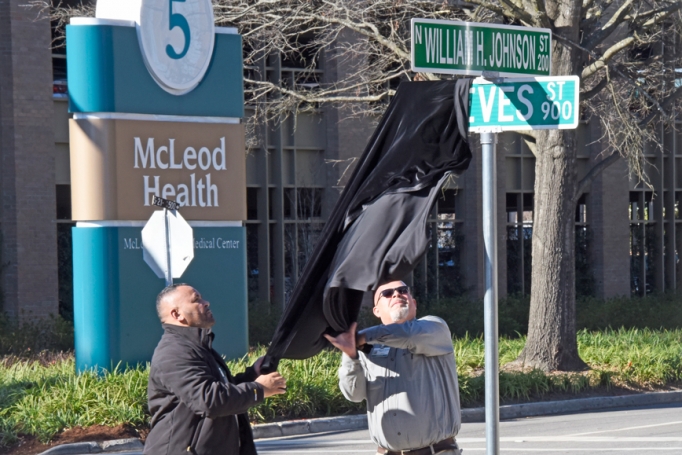 McLeod, through coordination of appropriate city, county and Department of Transportation officials, determined to recognize Johnson, considered by academics to be one of the top ten most important American Artists of the 20th Century, by commemorating his birthplace on the McLeod Medical Mile.

The unveiling of the William H. Johnson Street sign was held at the 900 block of East Cheves Street, property adjacent to the new road connector between Cheves and Palmetto Streets, which opens for patient convenience in February.

“It is a privilege to honor the work and legacy of William Henry Johnson in this manner. His life and talents began on this very campus, more than a century ago,” stated Rob Colones, President of McLeod Health.

During the ceremony, brief remarks were given by Dale Locklair, Senior Vice President of McLeod Health, Andrew Stout, Executive Director of the Florence County Museum, and Ben Zeigler, McLeod Health Board of Trustees.

In his remarks, Zeigler said, “The healing hands of medicine and the healing hands of art. Medicine seeks to restore and invigorate the body and art seeks to restore and invigorate the soul. It is appropriate that we celebrate them both today as we dedicate a road that connects two thoroughfares that define our medical campus here at McLeod, and that also connect our community from east to west.

“William Henry Johnson, who died almost 50 years ago, was born more than a century ago near where we stand today. Doubtless Johnson would have been painfully aware of bodily fragility and the need for healing when his Danish wife Holcha Krake died of breast cancer in January 1944. I like to think he would be pleased to know that in his home town, only a few hundred yards from where he grew up, there would be a world class cancer treatment center able to help women win the battle that his wife lost. As the husband of a breast cancer survivor who was treated at McLeod, I certainly am grateful for that fact, and like viewing one of his paintings, my experience gives me a sense of kinship with Johnson,” said Zeigler.

“In the years following the death of his wife, Johnson’s primitivism began to incorporate historical and spiritual concepts, connecting the reality he saw around him with broader themes, both temporal and transcendent. But for the rest of his working life, Johnson’s art remained grounded in the physical reality that connects us all,” added Zeigler. “It is this reality that the healing art must address every day, and at McLeod Health, we, like Johnson in his art, seek to do so faithful to broader concepts like honesty, justice and compassion. Worthy connections indeed, and reasons why we at McLeod Health are privileged to honor and remember William Henry Johnson as an artist, a connector, a healer and native son.”

About William H. Johnson
William H. Johnson, born in 1901, on the very block of the dedication ceremony, is considered one of the greatest artists of the 20th Century. Known primarily for his majestic Scandinavian landscapes and his witty and poignant scenes from his experiences of daily life, Johnson has made an indelible impact on American art. However, he is one of those rare artists whose influence can be felt beyond his art, for his life story has elements of a purely American drama that inspires and encourages any familiar with it.

Over the course of his career, the output of William H. Johnson’s significant work numbered into the thousands. A little more than 1,500 known works whose whereabouts have been accounted for. His large body of work displays a talent mastering a variety of styles while maintaining a powerful execution of unified expression.

The Florence County Museum has scoured all available resources and has a thorough biography of William H. Johnson that details the artist’s earlier years in obscurity as well as features among their exhibits a number of his incredible works.

McLeod Health, which received permission from both the Smithsonian Museum and the Florence County Museum, houses 12 important reproductions of his art from a variety of periods permanently on display in the McLeod Medical Plaza Conference Center.