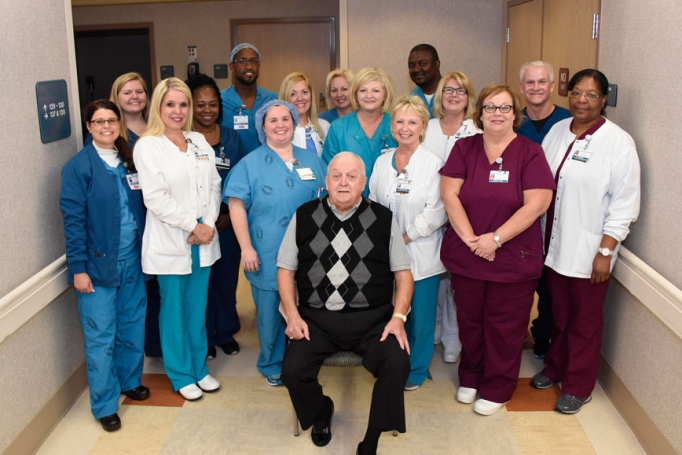 Kenny Allen reunited with the McLeod medical teams who saved his life on October 31. He is pictured with some of his “angels” that cared for him that day.

Kenny Allen had come to McLeod Regional Medical Center on August 31, 2017, for a minor outpatient procedure. The procedure was a success, and he was in the process of being discharged when he went into cardiac arrest, collapsed and coded. Medical teams immediately responded and began chest compressions and respiratory resuscitation. They worked for 90 minutes, used two crash carts and shocked him 10 times to revive him the first time he coded.

While in the process of being transported to the Trauma Surgical Care Unit (TSCU), Mr. Allen coded again. Additional shocking was necessary to revive him again, and he was admitted to TSCU. When his condition stabilized, he was taken to the cardiac catheterization laboratory where a stent was placed in the coronary artery to regain blood flow.

Following this procedure, Mr. Allen was admitted to the Coronary Care Unit (CCU) in critical condition and required a ventilator to help him breathe. His condition quickly improved and he was able to breathe on his own.

Medical teams from various hospital departments including Day Hospital, Emergency Services, Trauma, Cardiac Care, Surgical Services and Anesthesia all worked as one to save Mr. Allen’s life. Through this group effort Mr. Allen survived and did not experience any after effects.

On October 31, 2017, two months after his cardiac arrest, Mr. Allen and his wife Barbara returned to McLeod Regional Medical Center where they were reunited with team members who were instrumental in his miraculous recovery.

McLeod Day Hospital staff prepared a sunshine themed celebration in his honor. They chose this theme because one of the last things Mr. Allen remembers before he collapsed was Amy Prescott, RN, Recovery Room Supervisor, singing “You Are My Sunshine” to him in the Recovery Room. Amy is known to sing hymns to her patients while they are in the recovery process. On this day, however she unknowingly chose a song that is special to Mr. Allen. It is a song that he sang to his daughter while she was growing up.

Mr. Allen’s recovery continues with his participation in the McLeod Cardiac Rehabilitation program at the McLeod Health and Fitness Center and, according to Barbara, he gets more independent every day.

“It is truly a miracle,” said Barbara. “That day, every step Allen took was ordered by God, everyone was where they were and did what they do every day here at McLeod. It was all in God’s plan.”