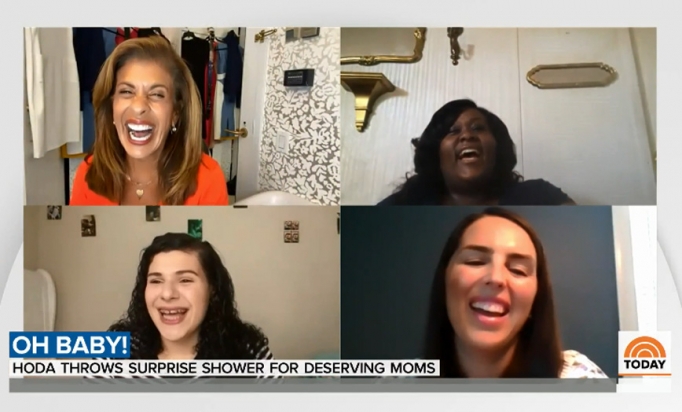 Shaquilla James, the first COVID19-positive patient to give birth in the McLeod Health system, recently received a surprise baby shower from Hoda Kotb, co-host of The TODAY Show with Hoda & Jenna. Hoda sent Shaquilla and two other moms a package with special gifts from Pampers as well as a year’s supply of diapers and wipes.

Shaquilla’s Story
First-time mother Shaquilla James of Summerton, South Carolina, joyfully anticipated the arrival of her daughter. In early April, 38 weeks into her pregnancy, Shaquilla developed a cough, which she initially associated with a sinus infection.

Shaquilla eventually sought care at the McLeod Health Clarendon Emergency Department, where she was tested for COVID-19. Her visit resulted in a positive diagnosis three days later.

Hours after receiving her results, Shaquilla went into labor. Weakened from days of severe coughing, Shaquilla asked her mother to call 911.

“I held her for a few moments but could not do skin-to-skin since we did not know if I could make Aubree sick,” recalled Shaquilla. “Tom then asked if I would prefer to isolate myself from Aubree as a precaution. I first said ‘no’ because I could not imagine being separated from my baby, but then I changed my mind. I loved her too much to do anything that could make her sick.”

Shaquilla felt well the next 24 hours, but then had difficulty breathing. Concerned about her condition, her medical team admitted her to the Intensive Care Unit for additional care.

Meanwhile, Shaquilla’s mother and sister cared for Aubree. Shaquilla’s Nurse-Family Partnership Nurse Home Visitor, Alison Baggette, came alongside the family for support and encouragement. She taught Shaquilla’s sister how to care for Aubree as well as how to create a safe sleep environment. She arranged for the family to have a pack ‘n play and set it up for them. She also visited them regularly to ensure they had everything Aubree needed.

Shaquilla’s condition continued to decline. The team at McLeod Health Clarendon decided to transfer Shaquilla to the Medical Intensive Care Unit (MICU) at McLeod Regional Medical Center in Florence, where she was immediately sedated and put on a ventilator.

Kelly Orton, a staff nurse in the MICU who had been assigned to care for Shaquilla, was by her side the moment she woke.

Kelly explained everything that was happening and gave Shaquilla a piece of paper to write down anything she needed.

Shaquilla wrote the words, “Please don’t leave me.” Moved by the request, Kelly stayed with Shaquilla throughout the entire process.

“Kelly was like an aunt to me,” recalled Shaquilla. “I was alone and scared, but Kelly showed so much compassion and never left my side. She even posted pictures of my baby throughout my room and helped me FaceTime Aubree so I could see her.”

Shaquilla continued to improve and made a full recovery. Her most anticipated moment came when she held her daughter for the first time almost two weeks after giving birth.

“I was determined to get better for my daughter,” said Shaquilla. “I thank God I am alive.”