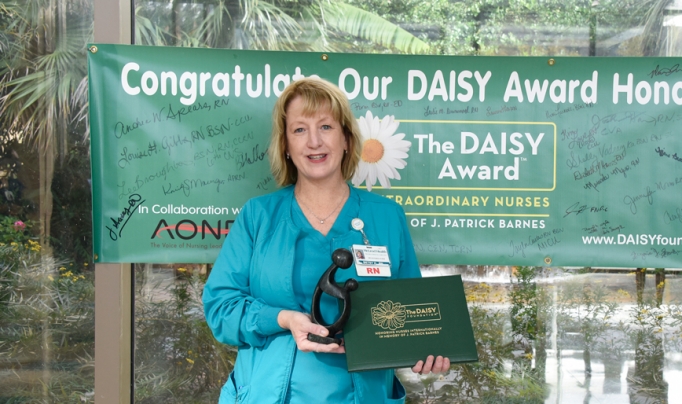 Betsy Harris, RN, a staff nurse in the Trauma Surgical Care Unit (TSCU), was recently named the September DAISY Award Recipient for McLeod Regional Medical Center. Harris was nominated by a patient’s sister for her extraordinary care and compassion.

The patient’s sister wrote, “I received the call at 3 a.m. that my brother had been in a car accident and suffered a traumatic head injury. Abruptly woken from my sleep, for a moment I thought I was having a nightmare. I was told that he was taken to McLeod and that I needed to come home because things didn’t look good. I live in Arlington, Texas.

“By 5 p.m. that day, I was at the airport boarding a plane with my children to South Carolina. My husband stayed behind to finish taking care of things at home and then drive to be with us. I can’t tell you the state of mind that I was in – having to be strong for my kids, my husband not being with me, and my worst fears unfolding before me as I considered the scenarios for my brother.

“When I got to McLeod, you can only imagine the swing of emotions my family and I experienced. We were a mess. We were angry, scared, and facing the unknown that we could barely wrap our heads around. Then, I met Betsy.

“What stood out the most about Betsy was that every time she came into the room, she addressed my brother, not just my family. It was evident that he was the center of her care. While he was heavily sedated and probably didn’t know what was going on, she would enter the room and say, ‘Hey Wesley, it’s Betsy.’

“She continued to talk to him, tell him what she was going to do before she did it and explained things to him and then directed things to us. She encouraged him. Even when things were very grim, she cared for him just like he was sitting there listening and able to answer her. While he could not communicate, she never treated him as if he couldn’t. Most importantly, she didn’t give up on him. No matter the state, my brother was still her patient and she gave all of herself to his care.

“My brother is out of the hospital and has gotten a good bit of his memory back, but he doesn’t remember what happened in the TSCU.  I have encouraged him to go back and meet Betsy and the nurses that cared for him. It is my hope that he will because I feel like it could help him in the healing process.

“Please recognize this nurse with such compassion, a strong work ethic, and calling for her profession. She selflessly cared for my brother and treated us as if we were her own family.”