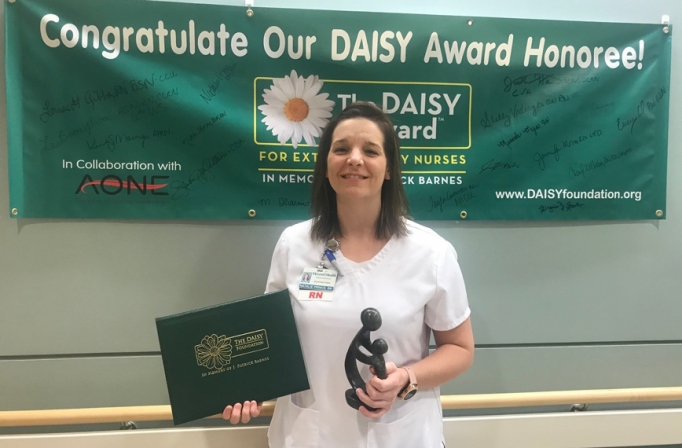 Natalie Prince, RN, received the March DAISY Award at McLeod Regional Medical Center for the compassionate and extraordinary care she gave to her patient.

Natalie Prince, RN, a staff nurse on the Cardiovascular Surgery Floor, was recently named the March DAISY Award Recipient for McLeod Regional Medical Center. Prince was nominated by a patient’s son for her extraordinary care and compassion.

On the nomination form, the patient’s son wrote, “My father had chest pain on a Thursday, and after going through the Emergency Room, he was transferred to the Cardiovascular floor on Friday. Natalie, his nurse during the daytime, continuously monitored him and asked about his condition from time to time. She treated him with great respect and patience and answered all of our queries. He had a small scare on Saturday after his admission, but she gave him medicine, and he started feeling better. On Sunday evening, my father’s condition suddenly started deteriorating. His whole bed started trembling, and he had problems with his left arm and difficulty breathing. Natalie assembled the whole team of doctors and nurses right away and told them to get him to the catheterization lab. We were all panicking, but she kept her cool the entire time, continuously monitoring the situation and communicating with the doctors. Later we learned that he had a stroke, but due to prompt care and treatment, his heart was not damaged. Thank you to the whole team of doctors and nurses, especially Natalie.”