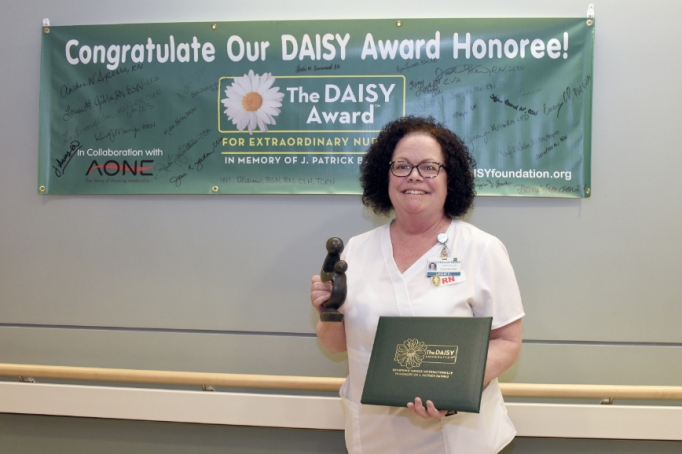 (Florence, SC, February 24, 2020) – Leslie Drummond, a staff nurse on the Cardiovascular Surgery floor, was recently named the January DAISY Award Recipient for McLeod Regional Medical Center. Drummond was nominated by a patient’s family member for her extraordinary care and compassion.

On the nomination form, the patient’s sister wrote, “My 40-year-old brother suffered a heart attack in December and a few days later it was decided that he would need bypass surgery. What followed were several days of sheer misery, sleepless nights, and constant interruptions that ensured my brother never got more than an hour’s sleep at any given time.

“As his sister, I’ve been here by his side for two weeks watching over him. One night, we were blessed to be assigned Leslie, who from the moment she met us showed compassion for his lack of sleep, amount of pain and overall experience here that we had not experienced before.

“Learning that he hadn’t slept the nights prior, Leslie worked hard to schedule all night visits for vitals, labs, medications, and treatments for just two times during the night. I can’t even explain what a huge blessing this was.

“Every interaction with her was honestly enjoyable – even for my brother who is still in a great deal of pain. Today is our tenth day here and we’ve encountered many doctors, nurses and technicians. Leslie stands out as a gem among them.

We just want to say a huge thank you to Leslie – you made our night.”