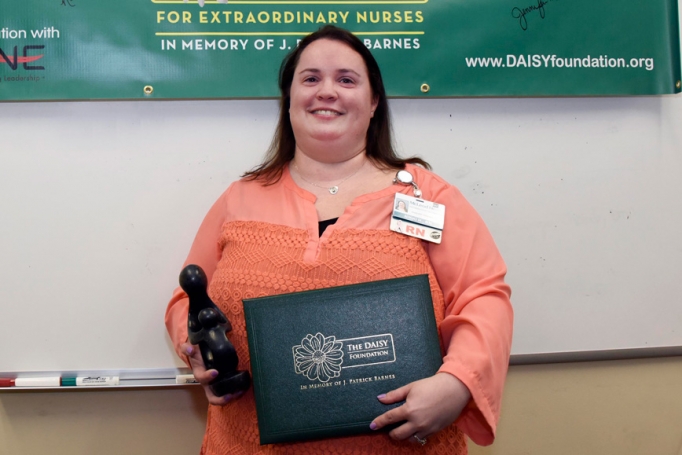 Registered Nurse Nikki Horne was named the January DAISY Award Recipient for McLeod Regional Medical Center on January 23, 2018. Nikki, the Assistant Director of Nursing for the Operating Room, was nominated by her brother, Paden Capps, a Business Manager for the Finance Analytics/Optimization Department at McLeod.

Paden nominated Nikki for the role she played in saving Jimmy McGee’s life after a near fatal accident on I-77 last October. Nikki was traveling with her family on I-77 near Columbia when they came upon the accident. Nikki witnessed a man crawling out from a vehicle that appeared to have rolled over multiple times. Instead of driving by and assuming that help was already on the way, she insisted that her husband stop the car for her to help. When she reached the gentleman she could see his arm was severely injured. With more than 16 years of nursing experience including serving on a trauma team – Nikki had the skills to handle such a situation.

McGee was losing a significant amount of blood. Nikki yelled out to her husband, Evan, that she needed something to make a tourniquet and he brought her his belt. She used a bystander’s towel to wrap around McGee’s arm and utilized the belt as a tourniquet. McGee kept saying that he was getting dizzy, but Nikki continued talking to him to keep him alert until EMS arrived on the scene.

“Some people work just to get a paycheck, but I know nursing is more than that to Nikki,” said McGee. “She was my guardian angel that day. If she had not stopped I wouldn’t be here today to thank her. She has even inspired me, now if I drive by an accident myself I stop to see what I can do to help.”

The not-for-profit DAISY Foundation is based in Glen Ellen, California, and was established by family members in memory of J. Patrick Barnes. Patrick died at the age of 33 in late 1999 from complications of Idiopathic Thrombocytopenic Purpura (ITP), a little known but not uncommon auto-immune disease. The care Patrick and his family received from nurses while he was ill inspired this unique way of thanking nurses for making a profound difference in the lives of their patients and patient families.

Recipients of the DAISY Award are chosen by the DAISY committee led by nurses at McLeod Regional Medical Center. Awards are given throughout the year at presentations in front of the nurse’s colleagues, physicians, patients, and visitors. Each honoree receives a certificate commending her or him for being an “Extraordinary Nurse.” The certificate reads: “In deep appreciation of all you do, who you are, and the incredibly meaningful difference you make in the lives of so many people.” The honoree is also given a beautiful and meaningful sculpture called “A Healer’s Touch,” hand-carved by artists of the Shona Tribe in Africa.