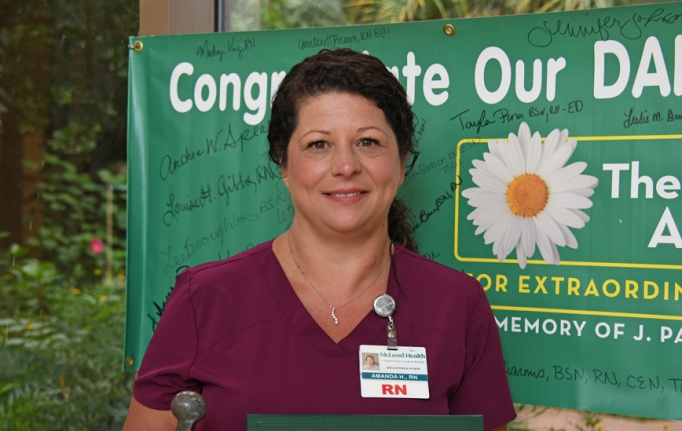 Byrd’s Nursing Director, Justine McLeod, received a picture of a social media post in which the individual was searching for the nurse who saved her grandfather’s life.

“Upon investigating who cared for this patient, I discovered it was Mandi,” said McLeod. “I called Mandi to let her know that someone had been searching for her, and she shared the story of what happened.

“The patient had become short of breath following a previous dose of a specific medication. Mandi researched the side effects and noticed that someone with a history of asthma could have an asthma attack after their doses. Since this medication was new, she called the physician to inquire about its side effects. Due to the reaction, Mandi was able to ask the physician to discontinue the medication.

“I told Mandi that she had changed someone’s life and didn’t even realize it. She does everything possible for her patients, peers and friends and never wants any accolades. She’s the kindest and most humble person and nurse.

“Anyone who has ever worked with her knows the impact she has on the people around her,” said McLeod.

About the DAISY Nursing Award

The not-for-profit DAISY Foundation is based in Glen Ellen, California, and was established by family members in memory of J. Patrick Barnes. Patrick died at the age of 33 in late 1999 from complications of Idiopathic Thrombocytopenic Purpura (ITP), a little known but not uncommon auto-immune disease. The care Patrick and his family received from nurses while he was ill inspired this unique way of thanking nurses for making a profound difference in the lives of their patients and patient families.