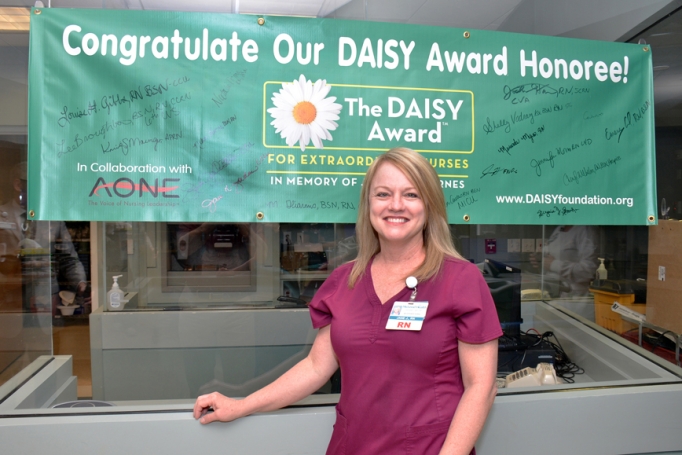 Jane Jordan, RN, a staff nurse in the Coronary Care Unit (CCU), was recently named the April DAISY Award Recipient for McLeod Regional Medical Center. Jordan, the 17th recipient of the DAISY Award, was nominated by a patient’s daughter for her extraordinary care and compassion.

On the nomination form, the patient’s daughter wrote, “My dad’s journey began in December when he had his appendix removed and was ultimately diagnosed with appendix cancer. He then underwent a colectomy on January 16, 2019 and was placed in the Surgical Progressive Care Unit due to his heart issues. On Friday, two days after his surgery, he developed trouble breathing. He was transferred to the CCU where Jane was the receiving nurse. He was hypoxic and had to be placed on the bi-pap.

“Jane let us know what was going on and kept us informed of everything they were doing. She also made sure we knew the results of his lab test, ABG, and other scans he had done. On Saturday, Daddy was placed on the ventilator because he had developed ICU delirium. Jane had him again on Wednesday while he was on the ventilator. She was great to us and let us know that they would try weaning him from the vent and what to expect. Daddy didn’t tolerate weaning well and ended up self-extubating himself on Thursday night. He was placed back on bi-pap and was doing well on that.

“Jane came back in for the weekend shift on Friday, and we had requested her to be his nurse. She took on that role even though she knew he was being a “handful” with the ICU delirium. He had a good couple of days. On Saturday, she got Daddy up to the chair, and he was placed on high flow oxygen. She was so proud that he was improving because she knew how important that was to me and my mom. Daddy ended up having a rough episode later that day and had to be put back on the bi-pap. Jane sat and talked with me and mom for over an hour, reassuring us that everything happening was a normal process in him getting better.

“Even though I know she had more patients to take care of, her sitting and talking with us eased our minds a little. We went home for the night since Daddy was resting good. I called to check on him the next morning, and Jane said he had a couple of “hiccups” during the night but nothing to be majorly concerned about right yet. We were getting ready to head to the hospital (we live an hour away) when Jane called and said things had gotten worse and they were about to re-intubate him. I told her no because that was not Daddy’s wishes. She did everything she could to keep him from declining any more until we got there. He told us he didn’t want to be re-intubated and that he loved us. We ultimately accepted the fact that he was ready to go home and be with his Lord and Savior.

“Jane spent her entire morning and afternoon in the room with us, explaining what was going on and what they were doing to keep him comfortable in his last moments. He was able to hold his favorite tiny human’s hand, his six-year-old grandson (only grandchild) while he slowly faded away to his heavenly home. He passed around 1 p.m. on that Sunday afternoon of January 27. While we were having some sad moments in Daddy’s room, Jane and some other fantastic staff took my son out to the nurses station and fed him doughnuts and juice. They gave him some markers and paper to draw with so his sweet little mind would be occupied. Out of the nine days Daddy was in the CCU, Jane had him five days. Jane was truly a Godsend to our family during this time.

“After my daddy passed, we got a call that my father-in-law had passed away on the same day. Jane has checked on me and my family since the devastating loss of my daddy and father-in-law. We could never repay the amount of love, care, and compassion Jane showed to not only my daddy, but to our entire family during his hospital stay and now more than a month later. Jane is definitely in the right profession with her kind heart and loving soul. She would be so deserving of this award.”