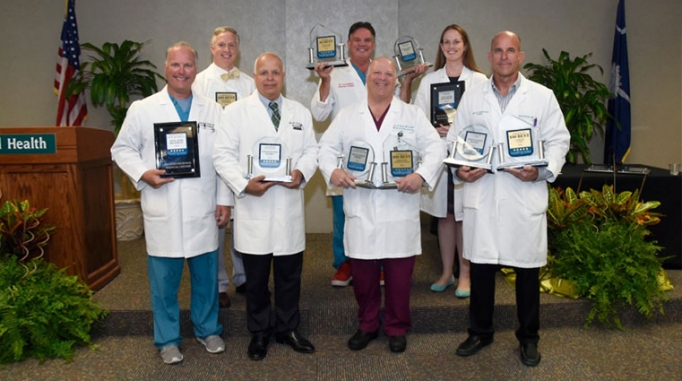 McLeod physicians, staff and teams have received 24 top honors for 2016 from Healthgrades®, the nation’s leading healthcare rating organization. These distinctions, driven by the analysis of data, are based on quality outcomes and superior performance.

For its 2016 study, Heathgrades 2016 Report to the Nation, Healthgrades evaluated nearly 4,500 hospitals nationwide for 33 of the most common inpatient procedures and conditions and identified the 50 best hospitals and the 100 best hospitals within each procedure.

“The Healthgrades 2016 Report to the Nation reveals striking disparities in quality at the local level, and underscores why it is vital for consumers to understand outcomes performance at alternative hospitals for specific conditions and procedures,” said Evan Marks, Chief Strategy Officer for Healthgrades. “Hospitals with superior outcomes for certain aspects of care may not perform as well in other areas. Moreover, a major metropolitan area may have many hospitals, but only a few may provide better-than-expected outcomes for the specific care a patient needs. Those hospitals that have achieved the Healthgrades distinction have demonstrated a commitment to exceptional quality care.”

“This recognition is evidence of the dedication and hard work performed daily by our physicians and staff in creating a culture of safety and quality,” said Rob Colones, President of McLeod Health. “We are honored that our efforts have resulted in McLeod receiving these distinctions, but more importantly, we want to continue to pursue excellence in quality care for the benefit of our patients.”

Marie Saleeby, Administrator of McLeod Regional Medical Center, stated, “Our physicians, clinical staff, and leadership team are encouraged by this national level recognition. Our priority has been to improve patient outcomes and experiences, and we will continue to bring the highest quality possible to our region.”

“McLeod has been honored nationally for its quality programs by a number of healthcare organizations,” explained Donna Isgett, Senior Vice President of Quality and Safety. “We compare ourselves to the nation’s best in receiving measurable results and continuously strive to improve everything that relates to the care of the patient.”

About McLeod Health
Recognized nationally for its quality initiatives and methodology, McLeod Health has a leading regional presence in Northeastern South Carolina and Southeastern North Carolina and a reputation for dedication to its patients and their families. McLeod is constantly seeking to improve its patient care with efforts that are physician-led, data-driven and evidence-based. The 15-county area McLeod serves, from the Midlands to the Coast, has a population of more than one million including those who live in Southeastern North Carolina.

Founded in 1906, McLeod Health is a locally owned and managed, not for profit organization supported by the strength of more than 750 members on the medical staff and over 1,800 nurses. In addition to its modern facilities, premier technology and equipment, McLeod is dedicated to improving the health of the residents of those communities it serves. McLeod Health is composed of approximately 7,500 employees and nearly 85 physician practices in ten counties. With seven hospitals, McLeod Health also operates a Health and Fitness Center, Sports Medicine and Outpatient Rehabilitation Center, a Behavioral Health Center, Hospice, and Home Health Services. The hospitals within McLeod Health include: McLeod Regional Medical Center, McLeod Darlington, McLeod Dillon, McLeod Loris, McLeod Seacoast, McLeod Health Cheraw and McLeod Health Clarendon.

About Healthgrades
The leading online resource for comprehensive information about physicians and hospitals, Healthgrades evaluates hospitals solely on clinical outcomes and incorporates information on patients who die in the hospital and in-hospital complications. For data, it uses 40 million Medicare hospital discharges from the most recent 3-year period. It examines 33 common procedures and conditions, adjusting its data for each patient’s age, gender and medical condition.