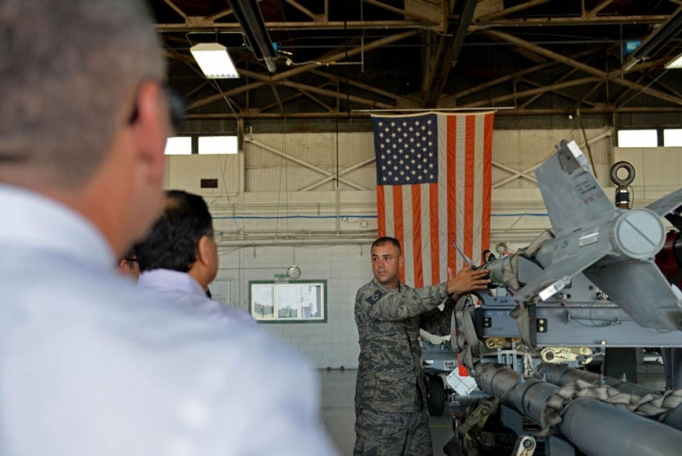 During the tour, representatives assigned to the weapons standardization hangar, also known as the load barn, and the air traffic control tower briefed visitors about their jobs and how their units use teamwork and leadership to accomplish the 20th FW mission.

“It’s key to our success in healthcare today that physicians are in leadership roles and can help the organization with daily operational decisions,” said Tiffany Ellington, McLeod Health vice president of physician recruitment and retention. “When we researched where to go on our field trip, I pulled up (Shaw’s) website and it was very impressive. It completely highlights what McLeod focuses on which are our values, our mission and our rallying cry. Those are some key concepts you have in the Air Force that we are instituting in our organization.”

While at the weapons standardization hangar the visitors learned about munitions, the F-16CM Fighting Falcon, and how Airmen work in teams of three to safely load the munitions.

“Each member has a different role to get the job done,” said Master Sgt. Crystal Fults, 20th Maintenance Group loading standardization crew chief. “The second member, his role is to prepare the aircraft, the third member their role is to prepare the munition and the first member makes sure that both members do (their jobs) and the end result is they come together as a team to load the munition.”

The load barn provided the physicians perspective on teamwork that may help them in the evolving landscape of healthcare.

“When we were at the load barn we talked about all those munitions,” said Dr. C. Dale Lusk, McLeod Health vice president of physician leadership and development. “All those munitions have a cost and all of them have an effectiveness and sometimes you have to make choices as to what is going to be the most— I hate to say this— bang for your buck. If you only have people who technically know how to load the weapon on the plane, and not someone who knows what effect the weapon has, decisions won’t be very efficient.”

Lusk said the Physician Leadership Academy is trying to provide new skills to physicians and administrators so they can work together, maintaining high technical expertise and managing organization costs while decision making.

“We saw this (tour) as an opportunity to look at people who are sometimes placed in a stressful environment similar to what we are, where there’s life and death situations on a regular basis,” said Lusk. “We wanted to see how a local group handled that.”

As a team, the 20th FW is the nation’s core suppression of enemy air defenses wing and prepares, employs, and sustains combat-ready F-16 airpower and Airmen. Whether the mission is running a hospital or providing the SEAD, an organization’s teamwork and leadership can be the difference between success and failure.