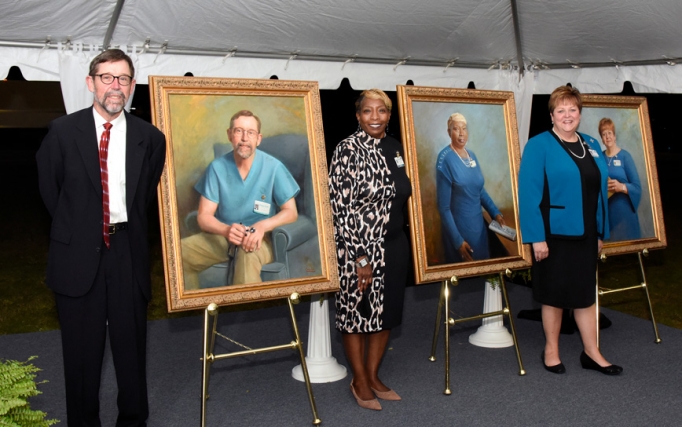 During the portrait unveiling ceremony, attended by the honorees, their family members, friends and colleagues, Rob Colones, President and CEO of McLeod Health, offered the welcome and invocation. He then turned the program over to Hart Smith, Retired Vice President of Women’s and Children’s Services at McLeod Regional Medical Center, and Deborah Locklair, Senior Vice President and Chief Human Resources Officer for McLeod Health, for remarks about Dr. Harlan’s dedication to the McLeod Neonatal Intensive Care Unit for nearly 40 years.

Prior to the unveiling of the portrait for Saleeby, Fulton Ervin, Senior Vice President and Chief Financial Officer for McLeod Health, and Kaye Floyd-Parris, Former Chairman of the McLeod Health Board of Trustees, reflected on Saleeby’s nursing and leadership career at McLeod which has spanned 32 years.

McLeod has a long-standing tradition of acknowledging the life-time achievements of McLeod Physicians, Nursing Professionals and Organizational Leaders. One of the most significant opportunities for recognizing meritorious service and paying tribute to the fine character of these individuals is through the act of commissioning a portrait in their honor by the McLeod Health Board of Trustees. The artist’s rendering of these individuals are placed on permanent display in areas representative of both the location of their service as well as commemorating their expertise in the field.

Sarah L. Williams
Exemplifying dedicated service to support the mission of McLeod Health for more than 35 years, Sarah Williams began her career with McLeod in June of 1984 as a part-time employee in Nutrition Services before accepting a full-time position in Laundry Services in 1985. Five years later, Williams was promoted to Lead Worker. In 1991, she accepted a promotion to Production Manager, the second in command to the director. Williams then chose to attend school to learn the mechanics of new automated equipment at the American Laundry & Linen College at Eastern Kentucky University, where she received the distinction as a Registered Laundry & Linen Director. Williams was promoted to Assistant Director in 2002 and that same year was named Director of Laundry Services. A recipient of the McLeod Merit Award, she currently serves as Director of Operations overseeing Laundry Services and Environmental Services.

Marie Saleeby
Marie Saleeby, RN, MSN, served as Senior Vice President and as Administrator of McLeod Regional Medical Center from 2006 to 2020. Prior to her promotion to executive leadership, Saleeby was Vice President of Patient Services and Chief Nursing Officer for 13 years. A member of the McLeod Health team since 1988, Saleeby began her service at McLeod as Nursing Director for the Surgical Intensive Care Unit and later was named Associate Vice President of Nursing. A fellow of the Johnson & Johnson School of Business Wharton Fellows Program in Management for Nurse Executives, Saleeby holds a Master of Nursing degree and certification by the American Nurses Association as Certified in Nursing Administration – Advanced.Honored for maintaining a current knowledge base of health care policies, procedures, and new technologies, Saleeby was instrumental in developing medication safety initiatives that served as national models for performance and standards of best practices for many patient care quality programs.