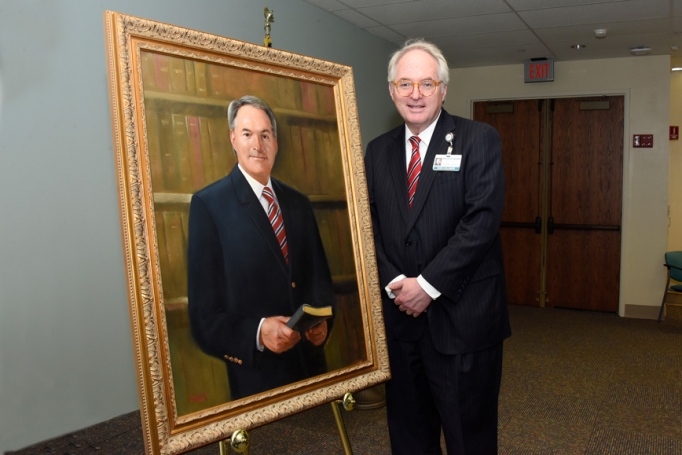 During a portrait unveiling ceremony at the McLeod Medical Plaza, Benjamin T. Zeigler, Chairman of the McLeod Health Board of Trustees, opened the evening by video welcoming Colones’ family members, friends, current and former colleagues.

Zeigler was followed by remarks on Colones’ 40-year career with McLeod Health by John Braddy, Former Chairman of the McLeod Health Board; Dr. Dale Lusk, Chief Medical Officer for McLeod Health; and Donna Isgett, President and CEO of McLeod Health.

In his remarks, Braddy said, “Over the years, I have heard the phrase, ‘There is a special culture at McLeod.’ The culture at McLeod was driven from the top down. It started with Rob as he developed the original quality and safety work at McLeod. When I first joined the Board of Trustees, members told me to listen, learn and most importantly to trust Rob. During my 15 years on the board, there has never been a time that I did not trust Rob. A soft spoken, introspective, extremely intelligent man who has never sought the spotlight, we watched as Rob built his senior leadership team around him. He would always push the young leaders to the front to receive the recognition. He also mentored them to trust each other, listen to each other, tear down the silos, understand each other’s perspective and respect each other whether they agreed or disagreed.”

In his closing, Braddy added, “I want to say thank you to Rob. Being in your presence and learning from you has made me not only a better leader, but a better person. All of us who have served on this board as volunteers have received far more blessings than the effort we put into the work. We are all better people for having spent time with you.”

Isgett explained that McLeod honors the lifetime achievements of role models who have impacted the organization in superlative ways with the commissioning of a portrait. “During the past year, the McLeod Health Board of Trustees directed this well-deserved recognition of Rob Colones, President and CEO for the past 20 years. It was also important that Deb, Rob’s beloved wife, was included in this planning and process. It was during many quiet, and thoughtful sessions by phone, text and in person, that she worked with the artist to ensure that the quality, professionalism, compassion and likeness of Rob’s character was reflected on the canvas. Deb’s heart and eyes provided oversight of this gift.

“Many of us formulate our own ideas and philosophies about what constitutes a great leader. Words like remarkable, extraordinary, inspirational and visionary come into play. And while these characteristics often accompany reflections on the professional career of Rob, it’s what he would downplay the most. Because Rob’s legacy and strength is his humility, eternal hope and honesty. It’s his constancy in seeking favor not in the eyes of men, but in the heart of God. He has poured out daily for more than four decades his gifts of insights, brilliance and integrity, and I am one of many, many people, better for it,” added Isgett.

McLeod has a long-standing tradition of acknowledging the life-time achievements of McLeod Physicians, Nursing Professionals and Organizational Leaders. One of the most significant opportunities for recognizing meritorious service and paying tribute to the fine character of these individuals is through the act of commissioning a portrait in their honor by the McLeod Health Board of Trustees. The artist’s rendering of these individuals are placed on permanent display in areas representative of both the location of their service as well as commemorating their expertise in the field.

Tuesday’s event marked the 32nd portrait honoring individuals during the past three decades.

About Robert L. Colones
A long-time member of the McLeod Health management team, Robert L. Colones serves as President Emeritus, an advisory position designed to provide historical perspective and guidance. He most recently served as President and CEO of the organization since 2002. Under his leadership and direction for two decades, McLeod Health has thrived and grown into a leading health system recognized nationally for its quality and safety initiatives. He has passionately led the charge for the McLeod organization to be physician-led, data-driven and evidence-based.

Colones joined McLeod Regional Medical Center in 1981 as Director of Business Services and Director of Strategic Planning. Since that time, he served in numerous leadership roles prior to his service as CEO for nearly two decades. In 1989, he was appointed Vice President of Patient Services with responsibility for the McLeod Heart Institute, McLeod Behavioral Health and McLeod Professional Services. He was promoted in 1994 to Executive Vice President and Chief Operating Officer, charged with the leadership and daily operations of the four hospitals and affiliates of the McLeod Health System at that time to the present day seven hospital system from the midlands to the coast.

He earned his MBA from Duke University Fuqua School of Business and his undergraduate degrees in Business Administration Finance from the University of South Carolina and Hospital Administration from Park College. He has served on the faculty and provided leadership for numerous academies, committees, and state as well as national advisory boards for health care quality and improvement.

Colones received the Milliken Medal of Quality Award from the South Carolina Quality Forum in 2002. This distinction honors one South Carolinian annually for outstanding contributions in initiating quality in Business. Colones has also been honored with the United Way of Florence County’s Ashby P. Lowrimore Award, the 2017 Champion For Youth by the Boys & Girls Club of the Pee Dee Area, and the 2018 Grassroots Champion by the American Hospital Association.