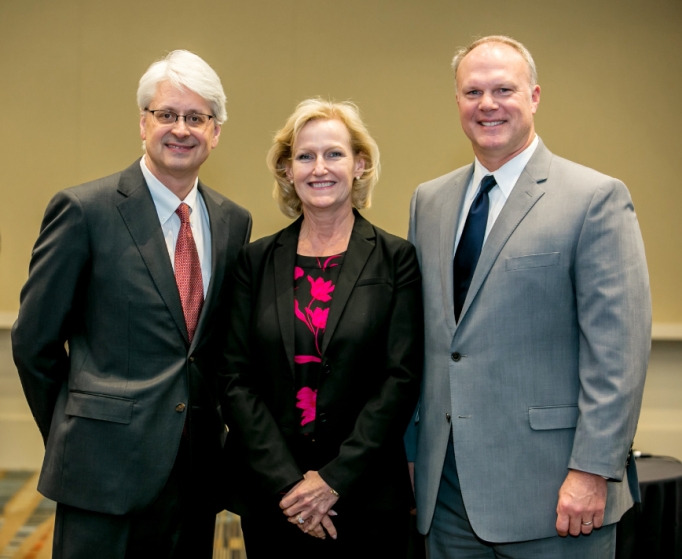 (Florence, SC, February 5, 2020) Donna Isgett, Chief Operating Officer for McLeod Health, has been named the new board chair for the South Carolina Hospital Association (SCHA). The announcement was made during the SCHA Annual Meeting on February 4, 2020.

A member of the SCHA Board of Trustees since 2013, Isgett was installed in this leadership role this week succeeding outgoing chair, Tod Augsburger, President and CEO of Lexington Medical Center. As board chair, she will serve a one-year term until the 2021 SCHA Annual Meeting.

“It is indeed an honor and a privilege to serve in this role with the South Carolina Hospital Association Board of Trustees,” said Isgett. “Working together we can face the healthcare challenges that impact patients and their families throughout our state.”

The SCHA Board of Trustees is responsible for overseeing the objectives of the association and determining policy that supports South Carolina’s hospitals and health systems in their collective efforts to build a better state of health. SCHA board members serve three-year terms and may be re-elected for an additional three-year term.

Founded in 1921, the South Carolina Hospital Association (SCHA) is the leadership organization and principal advocate for the state’s hospitals and healthcare systems. Based in Columbia, SCHA works with its members to improve access, quality, and cost-effectiveness of health care for all South Carolinians. The state’s hospitals and healthcare systems employ more than 70,000 persons statewide.

In her role as COO, Isgett has oversight of administrators at all seven hospitals in the McLeod Health system, which serves 18 counties, from the Midlands of South Carolina to the Coast. She has worked at McLeod since 1997, most recently serving as Corporate Senior Vice President of Quality and Safety, as well as McLeod Physician Associates. Her focus involves fostering a culture of system-thinking to benefit patients, physician and staff engagement and the pursuit of clinical and service excellence throughout McLeod Health.

Isgett is also a member of the McLeod Regional Medical Center and McLeod Loris Seacoast Community Boards. In 2015, she was elected to the Coker College Board of Trustees. Isgett served as founding co-chair for the South Carolina Hospital Association (SCHA) Re-engineering Committee and is a member of the Board of Trustees for SCHA. In 2011, she was one of two South Carolina healthcare leaders appointed to the Institute for Healthcare Improvement’s Executive Quality Leader Network. Additionally, she has served on the Regional Policy Board for the American Hospital Association.

Isgett also served as the co-chairperson for the 2005 Institute for Healthcare Improvement’s National Forum. She has personally been honored by receiving the Milliken Medal of Quality Award from the South Carolina Quality Forum, the Lewis Blackman Patient Safety Award from the South Carolina Hospital Association, the Mary Dean Brewer Women of Distinction Award, the Tribute to Women of Influence Award and the Extraordinary Women’s Healthcare Award. Isgett is also a 2011 Liberty Fellow with the Aspen Global Institute. She is married to John Isgett and they have two children, John and Sarah.