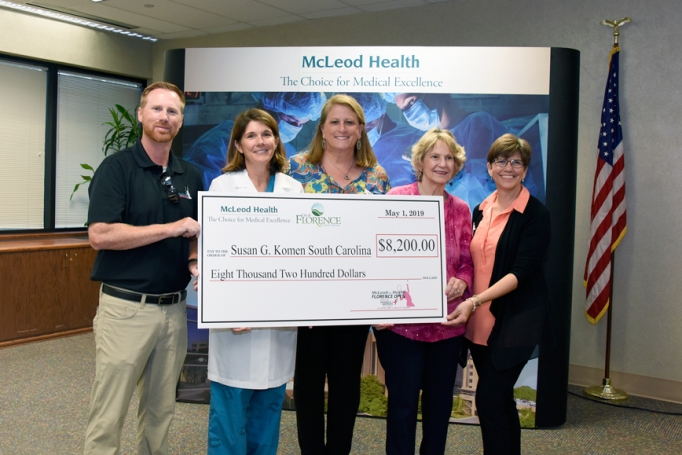 On May 1, the McLeod for Health Florence Open Tennis Tournament presented its 2018 profits — a total of $8,200 – to Susan G. Komen South Carolina to help fight breast cancer in the northeastern region of South Carolina.

Hill also expressed his appreciation to McLeod Health for another successful event benefitting Komen South Carolina and women at risk for breast cancer. He added that over the last five years, the McLeod for Health Florence Open has raised more than $51,000 for Susan G. Komen South Carolina.

Dr. Murrell explained why the tournament is near and dear to her heart. “Every day at McLeod I take care of women with breast cancer and partnering with the Florence Open and Komen South Carolina allows us to raise awareness and early detection of this disease. I also have four daughters that I often play tennis with so this event brings my two passions together. The tournament provides an opportunity to contribute directly to the health of the women we serve in the region and stress the importance of regular physical activity.”

Spears noted that over the years Susan G. Komen South Carolina has provided significant funding to Pee Dee area programs, including grants totaling more than $479,000 dollars to support breast cancer programs and patients at McLeod Health. Among other things, these grants have been used for mammograms, follow-up diagnostic procedures, patient navigation services, and survivor support services, including transportation.

Spears added, “Partnerships and support like this will help us reach our goal to reduce the number of breast cancer deaths by 50 percent in the U.S. by 2026.”

Dr. Murrell also announced that McLeod Health will remain the title sponsor for the 2019 McLeod Open, which will be held at the Dr. Eddie Floyd Florence Tennis Center October 13-20, and that Susan G. Komen South Carolina will once again receive the net proceeds. The week-long USTA Pro Circuit women’s event, now going into its eighth year, draws some of the best young professional players from around the world to compete for $25,000 in prize money and higher rankings.

With more than 90 tournaments held annually throughout the country, the United States Tennis Association Pro Circuit is the pathway to the U.S. Open and tour-level competition for aspiring tennis players and a frequent battleground for established professionals. The largest developmental tennis circuit in the world, it draws more than 1,000 men and women each year from more than 70 countries to compete in cities nationwide. Virtually all of the best known pros began their careers on the USTA Pro Circuit as well as some of the sport’s top new players including former McLeod for Health Florence Open players Bianca Andreescu, Taylor Townsend and the current #1 player in the world and last year’s U.S. Open Champion Naomi Osaka.

Florence, one of the smallest cities on the circuit, was selected to host an event because of its world-class courts, its strong volunteer base, and the generosity of its sponsors. This eight-day tournament puts Florence on the world tennis map and generates significant tourism revenues for our community.