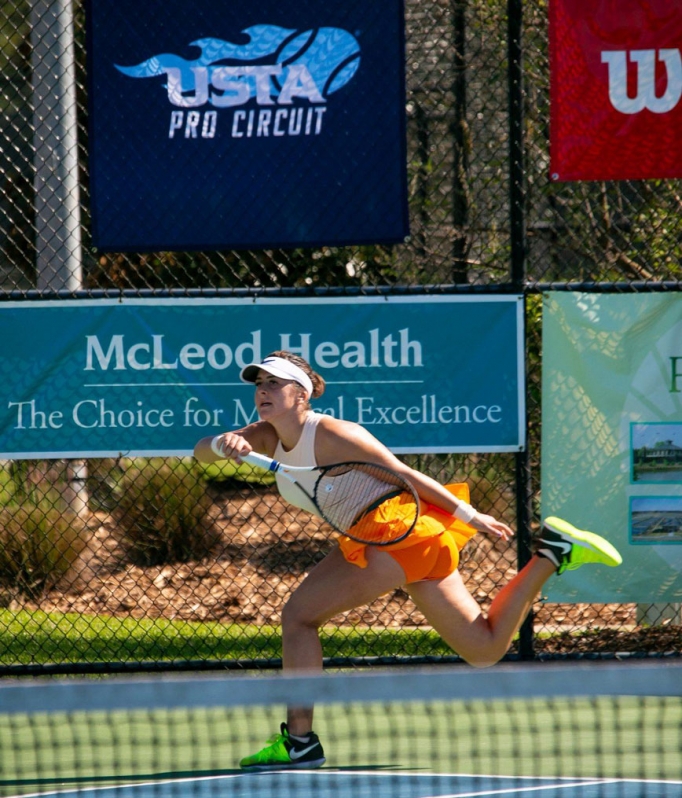 Bianca Andreescu is pictured playing in the 2018 McLeod for Health Florence Open. She went on to win the singles finals and recently beat Serena Williams in the 2019 U.S. Open singles finals.

The McLeod for Health Florence Open is underway at the Dr. Eddie Floyd Florence Tennis Center. Florence’s only professional tennis tournament, made possible by the partnership between McLeod Health and the City of Florence, helps raise awareness of breast cancer and physical activity through the tournament, which benefits Susan G. Komen South Carolina.

Not only does the professional tennis tournament raise funds for local benefit, it draws nearly 100 of the world’s best women players to town. The USTA Pro Circuit features competitive matches between tennis’s rising athletes. Last year’s McLeod for Health Florence Open winner Bianca Andreescu went on to win the 2019 US Open last month defeating Serena Williams in the final.

“Florence residents have a great opportunity to come out and see several of the sport’s future stars. These ladies are playing at a very high level. Nothing illustrates that more than our current champion going on to win the US Open,” adds Rob Hill, Tournament Director.

Players will be competing for ranking points and a $25,000 purse. As one of the smallest cities on the USTA Pro Circuit, Florence was selected to host the event because of its world-class courts, strong volunteer base, and the generosity of its sponsors.

A Wildcard Tournament was held in September for players to compete for spots in the qualifying rounds and in main draw competition. Local tennis standout Zoe Cauthen won the event and received a wildcard in to both the singles and doubles main draw. Cauthen excelled as a player for Florence Christian School and currently plays at the collegiate level for Charleston Southern University.

The public is encouraged to come out to enjoy matches daily and participate in Community Day events on October 19 and 20. Scheduled community activities include a College – Am Round Robin, Hit and Get for prizes, and the Junior Team Tennis Challenge. Wrapping up the tournament is the singles final match and trophy presentation on Sunday afternoon. All matches and Community Day events are free and open to the public.