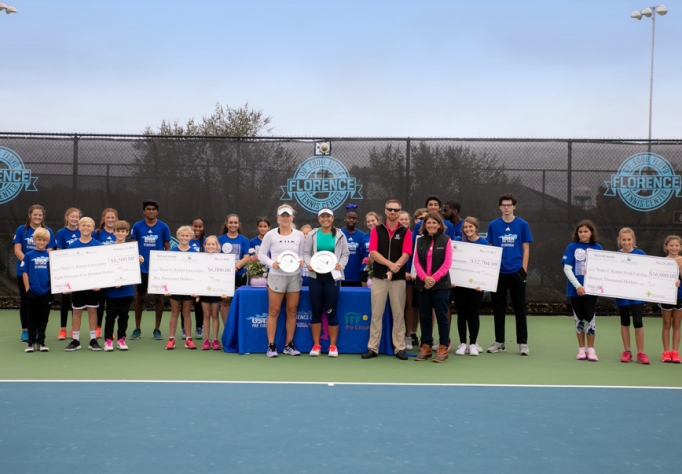 The McLeod for Health Florence Open concluded on Sunday, October 20, with the finals in the Singles Championship. During the eight-day tournament, McLeod Health raised awareness of breast cancer and physical activity as a sponsor of the USTA women’s professional tennis tournament benefitting Susan G. Komen South Carolina.

American Claire Liu won the 2019 McLeod for Health Florence Open Singles Final. This was the first International Tennis Federation (ITF) win by Liu in two years. In 2017, she was ranked the number one junior tennis player in the world following her win at Wimbledon as the girls’ junior singles champion (the first American in 25 years to win this championship) and finishing as runner-up at the French Open.

Liu came into the McLeod tournament as the seventh seed and proved herself a top contender for the title, winning every single set of her five matches this week. On Sunday, in a quick one hour and four-minute final match, Liu breezed by Peyton Stearns (USA) 6-1, 6-2 to take the 2019 McLeod for Health Florence Open title.

On Saturday, the number two seeded team of Emina Betkas and Tara Moore won the Doubles Championship. This duo has 12 recent doubles titles between them, one of those titles they won together earlier this year. Moore also played in the McLeod for Health Florence Open Doubles Championship in 2018.

With McLeod Health as the presenting sponsor for the sixth year, the tournament focused its communications on health-related themes, including the value of physical fitness and the crucial importance of early detection and treatment of breast cancer. Net proceeds will go to Susan G. Komen South Carolina to help in the fight against breast cancer in the region. Komen South Carolina has provided significant funding to regional programs, including grants totaling more than $479,000 dollars to support breast cancer programs and patients at McLeod Health. Among other things, these grants have been used for mammograms, follow-up diagnostic procedures, patient navigation services, and survivor support services, including transportation.