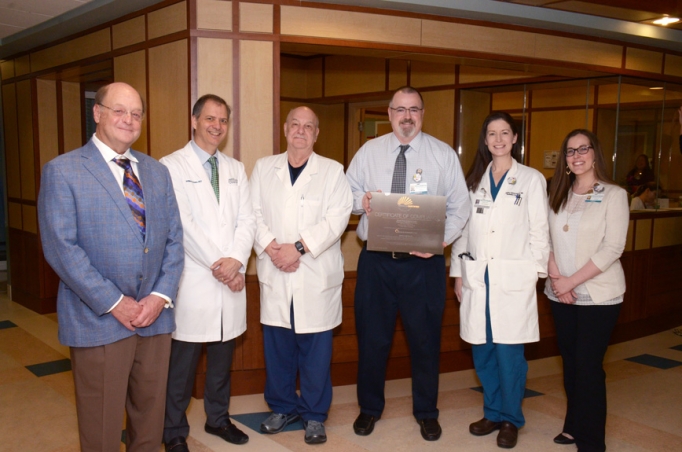 The McLeod Center for Cancer Treatment and Research has been named a Novalis Certified Cancer Center following a rigorous and voluntary audit conducted by an independent, third-party panel of experts in radiation oncology, patient safety and treatment quality.

One of only eight Novalis Certified Centers in the United States, McLeod is the only such cancer center in South Carolina. The hospital also represents one of only 46 certified centers worldwide.

“These experts in the industry measured the quality and safety standards of our radiosurgery program and concluded that we are delivering stereotactic radiosurgery (SRS) and stereotactic ablative radiotherapy (SABR) at a high level of efficacy and safety commensurate with an excellent standard of clinical practice,” explained Dr. Virginia Clyburn-Ipock, McLeod Radiation Oncologist.

On McLeod’s pursuit of this international certification, Tobin Hyman, MS, DABR, Chief Medical Physicist for the McLeod Cancer Center, added, “We believe that we have a great responsibility to patients and their families to commit our staff and equipment to a 360-degree review of our radiosurgery program. In today’s healthcare environment, specialized treatment techniques such as SRS and SABR should undergo a comprehensive external review at regular intervals to ensure the safest care possible is being delivered when you are treating patients with brain, spine or lung cancer.”

Advantages of SRS and SABR to patients include the ability to receive treatment in their own community. “A cancer diagnosis is a life changing event for all of our patients,” says Dr. T. Rhett Spencer, McLeod Radiation Oncologist. “Some of these patients are also living with advanced disease. The decision by McLeod to invest in the technology to plan and accurately deliver these types of cancer treatments means patients do not have to leave home at this stage of their lives to receive the highest level of care. At this point in their cancer journey, patients often want to live to reach certain milestones. They wish to spend quality time with their family and friends. We make that possible offering these forms of cutting-edge treatments.”

SRS and SABR also benefit a patient’s time with fewer treatments. Compared to conventional radiation therapy which involves smaller daily doses of radiation in 25 to 35 treatments over five to seven weeks, SRS/SABR delivers five to ten times the daily dose of radiation in as few as five days of treatment. The increased dose improves the effectiveness of this form of treatment.

Stereotactic radiosurgery is a non-surgical radiation therapy that treats cancerous tumors in the brain and spine. This form of treatment allows the McLeod Radiation Oncology team to deliver precisely-targeted radiation with sub-millimeter accuracy in a fewer number of treatments offering patients more convenience and a better quality of life.

When the team uses radiotherapy to treat tumors in areas of the body other than the brain and spine (lung, liver, adrenal gland, prostate); it is referred to as stereotactic ablative radiotherapy. These two forms of treatment, performed at McLeod, function differently from conventional radiation in that the intent involves delivering an ablative dose to overwhelm all of the abilities of a cancer cell to defend itself.

Novalis Certified is an independent accreditation program that promotes the delivery of cranial and body radiosurgery at the highest level of competency and expertise. In addition to assurance that the McLeod Cancer Center goes above and beyond standard measurements for quality care delivery, the radiation oncology team also has the ability to share information with other leading cancer centers. Being a part of this worldwide communication and collaborative network enables McLeod to receive new ideas on treating cancer, improving the safety of treatment and making existing techniques better.