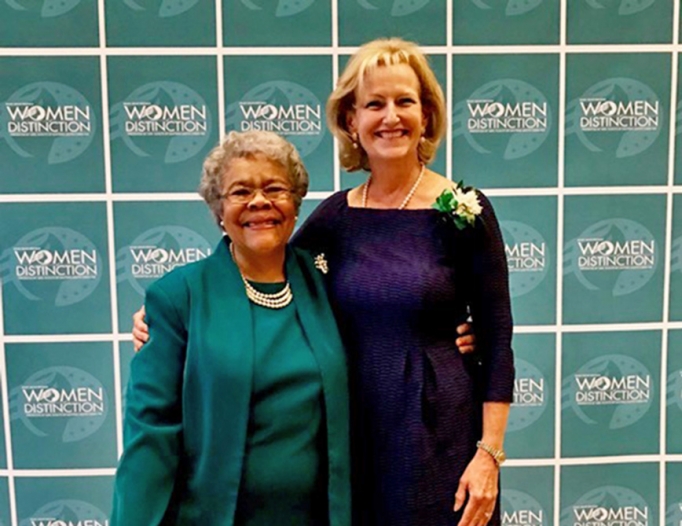 The Mary Dean Brewer Women of Distinction Award is given to recognize women living and working in the eastern South Carolina area who have demonstrated qualities of outstanding leadership and excellence in their personal and professional endeavors.

Isgett has served as Senior Vice President of Corporate Quality & Safety since February of 2010. In this role, she is responsible for the corporate oversight of the Divisions of Clinical Effectiveness, Service Excellence, Operational Effectiveness, Corporate Quality and Risk Management, Clinical Outcomes, Epidemiology, Medical Staff Credentials and Case Management for McLeod Health. She is currently also serving as the interim Senior Vice President for McLeod Physician Associates.

Isgett joined the McLeod team in 1997 as Director of Nursing Information Management. Prior to her position with McLeod, she spent the majority of her clinical career as an emergency flight nurse. In 1998, she began leading the hospital’s quality improvement efforts in the newly formed Clinical Effectiveness Division and within three years was promoted from director to vice president.

Her leadership skills have been evident during the past 20 years with McLeod as numerous distinctions, awards and recognitions have acknowledged McLeod as a model in health care performance due to her efforts to develop quality and safety initiatives. This recognition has included McLeod Regional Medical Center receiving the 2010 American Hospital Association-McKesson Quest for Quality Prize™, which is awarded annually to one hospital in the country for leadership and innovation in quality, safety, and a commitment to patient care. McLeod is also the first and only hospital in South Carolina to receive this prestigious honor since the inception of the national Quest for Quality Prize in 2002.

Isgett serves as Co-Chair of the McLeod Health Quality Operations Committee and as a member of the McLeod Regional Medical Center Community Board. In 2015, she was elected to the Coker College Board of Trustees. Isgett served as founding co-chair for the South Carolina Hospital Association (SCHA) Re-engineering Committee and is a member of the Board of Trustees for SCHA. In 2011, she was one of two South Carolina healthcare leaders appointed to the Institute for Healthcare Improvement’s Executive Quality Leader Network. She also served as the co-chairperson for the 2005 Institute for Healthcare Improvement’s National Forum.

Isgett has personally been honored by receiving the Milliken Medal of Quality Award from the South Carolina Quality Forum, the Lewis Blackman Patient Safety Award from the South Carolina Hospital Association, the Tribute to Women of Influence award and the She Magazine Extraordinary Women’s Healthcare Award. She is also a 2011 Liberty Fellow with the Aspen Global Institute. Isgett and her husband, John, reside in Darlington. They have a daughter, Sarah, and a son, JT.