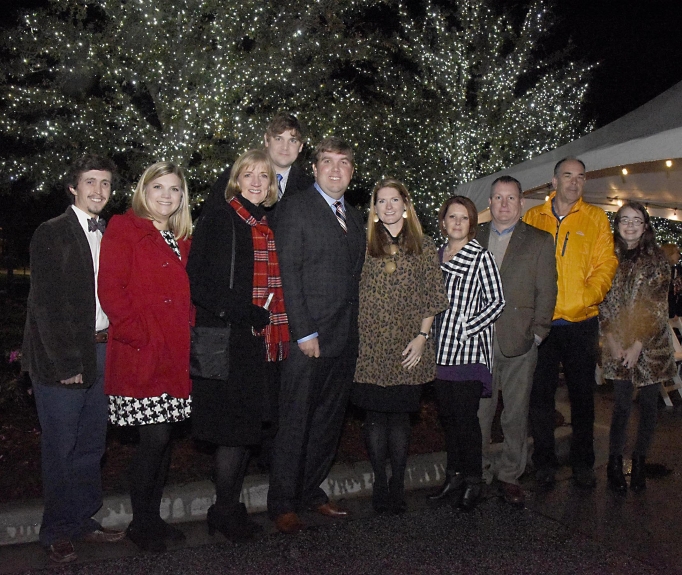 The family of Mark Raines were honored to light the trees this year in his memory.

McLeod Hospice celebrated its 32nd Annual “A Light for Someone You Love” Tree Lighting Ceremony on Thursday, December 7, at McLeod Regional Medical Center.

During the ceremony, the family of Mark Raines lit the trees. On behalf of the family, his son, Grey Raines, offered remarks on how much McLeod Hospice meant to them during Mark’s end of life journey.

In addition to the lighting of the trees, a musical presentation was provided by Masterworks Children’s Choir under the direction of Susan Howard.

In January 2017, McLeod Hospice began honoring its patients who are Veterans through the “We Honor Veterans” program, a nationally sponsored Hospice Veteran Partnership. When the Hospice team learns that a patient is a Veteran they arrange a “Veteran to Veteran” pinning ceremony at the patient’s home or in the McLeod Hospice House to thank them for the sacrifices they have made and the courage it takes to defend honor, duty and country. The program has been well received and to date 75 McLeod Hospice patients have been pinned.

Proceeds raised through the tree lighting directly benefit McLeod Hospice. “The Light for Someone You Love” program is sponsored by the McLeod Health Foundation to directly fund items needed for the McLeod Hospice House, to help patients remain comfortable in their homes, provide bereavement care for families being served as well as others in the community, and to offer the children’s grief support program, Camp Jessie’s Kids.

While the lighted trees will brighten the community this season, the gifts they represent will help bring the light of hope to McLeod Hospice patients and their families all year long.