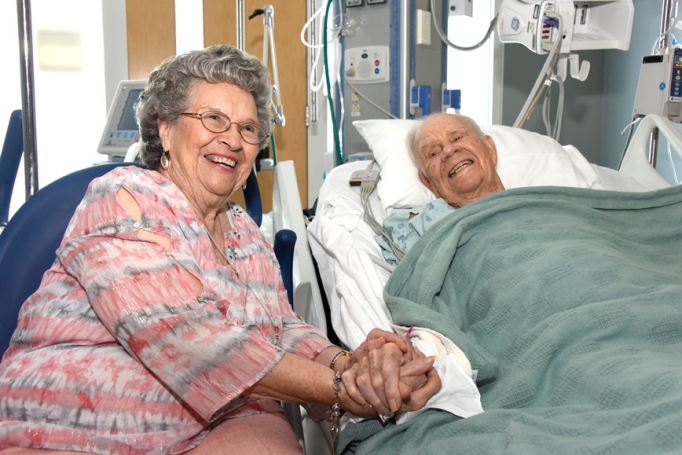 On Wednesday, June 10, Ralph Johnson did not know his son-in-law Mark was preparing him to see his bride of 70 years for their anniversary when he made sure his face was shaved, hair combed, and he had a little bit of after-shave.  Ralph had not seen his wife JoLynn since he had been admitted to McLeod Health Cheraw on Saturday, June 6 with complaints of shortness of breath and a racing heart.

Ralph was cutting grass at their home in Cheraw when his symptoms began. Their eldest daughter Terrie brought him to the Emergency Department at McLeod Health Cheraw. The medical team diagnosed Ralph with atrial fibrillation and transferred him to McLeod Regional Medical Center in Florence for advanced treatment.

Atrial fibrillation, also called AF or A-Fib, is one of the most common irregular heart rhythms.  AF is an abnormality of the electrical system of the heart. It is a rapid beating of the upper chambers of the heart, which prevents the heart from pumping blood adequately to the lower chambers.

On Tuesday, June 9, Ralph wondered what his wife was going to be doing for their anniversary, the next day. He never suspected that his family was conspiring together to get JoLynn to McLeod Regional Medical Center for a surprise visit.

There were tears of joy when JoLynn entered Ralph’s room in the Coronary Care Unit the morning of Wednesday, June 10. “I never dreamed I would get to see you on our anniversary,” said Ralph to his wife. “This is such a wonderful surprise.”

Ralph and JoLynn met at age 15 but they didn’t become sweethearts until a couple of years later right before he went on active duty with the Navy in 1946.  “We started dating in December and he left in January,” recalled JoLynn.

JoLynn waited for two years for Ralph to return home. They were joined in holy matrimony during a small ceremony at Fourth Street Baptist Church in Hartsville in 1950.

After three children, five grandchildren and 70 years of material bliss, the couple had nothing but smiles for each other during their surprise visit.

“I am so thankful and grateful for this time we have together today,” said JoLynn to Ralph. “But, I am anxious for you to come home. I don’t like your half of the bed being empty.”

“We are so grateful for all the people caring for Ralph both here and the ones that helped us in Cheraw,” said JoLynn. “If you have to be in the hospital McLeod is the best.”