Colones Named as the 2017 Champion For Youth 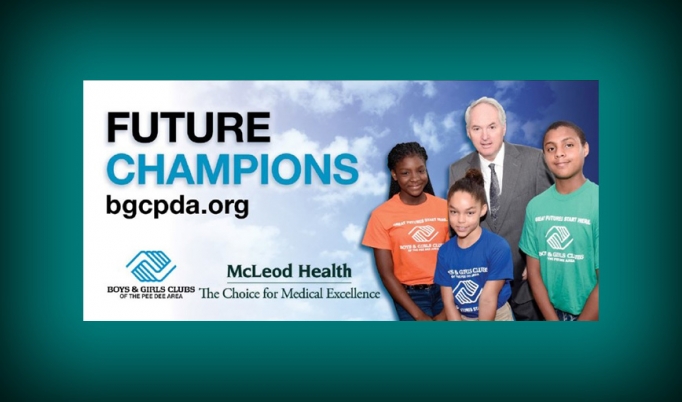 Boys & Girls Clubs of the Pee Dee Area is pleased to name Rob Colones, President and Chief Executive Officer of McLeod Health, as their 2017 Champion For Youth. The Champions For Youth Tribute in his honor is scheduled for Thursday, August 31 at The Waters Building.

The event begins at The Waters Building (135 S. Dargan Street in Florence) at 6:00 p.m., with the award presentation at 7:00. For the first time, Aramark at McLeod will provide refreshments for the evening. Sponsorships range from the $10,000 Hall of Fame sponsorship (including 12 attendees and a Carolina Classic sponsorship) to a $250 Booster sponsorship for two attendees. Individual tickets are available for $75. The evening also includes a raffle for several valuable items.

Colones has been with McLeod for 36 years, serving in a variety of executive roles before beginning in his present position in 2002. He earned his undergraduate degrees in Business Administration Finance from the University of South Carolina and Hospital Administration from Park College. He also holds an MBA from Duke University Fuqua School of Business. He has served on the faculty and provided leadership for numerous academies, committees, and advisory boards for health care quality and improvement. He has also chaired the American Heart Association’s Pee Dee Heart Walk and served on the Leadership Advisory Panel to the Board of the United Way of Florence County.

In addition, Colones has served as a member of the Florence-Darlington Technical College Foundation Board and the Board for the Church at Sandhurst, where he also serves as an Elder. Colones received the Milliken Medal of Quality Award in 2002 and the Ashby P. Lowrimore Award in 2013. Colones resides in Florence with his wife, Deborah. They have three sons: John Thomas, Wil, and Stephen.

This 14th annual Champions Tribute supports Boys & Girls Club programs that help thousands of children throughout the Pee Dee grow into productive adults. Your attendance and financial contribution will help brighten the lives of some of our community’s most promising children. The Boys & Girls Clubs serve youth every day after school and all day on non-school days and during the summer. Clubs provide a safe place where young people can learn and grow while helping them become productive citizens.

Join the Pee Dee community in honoring Rob Colones and supporting the Boys & Girls Clubs of the Pee Dee Area. Call (843) 662-1142 for reservations or more information.