Colones Named the 2017 Champion For Youth 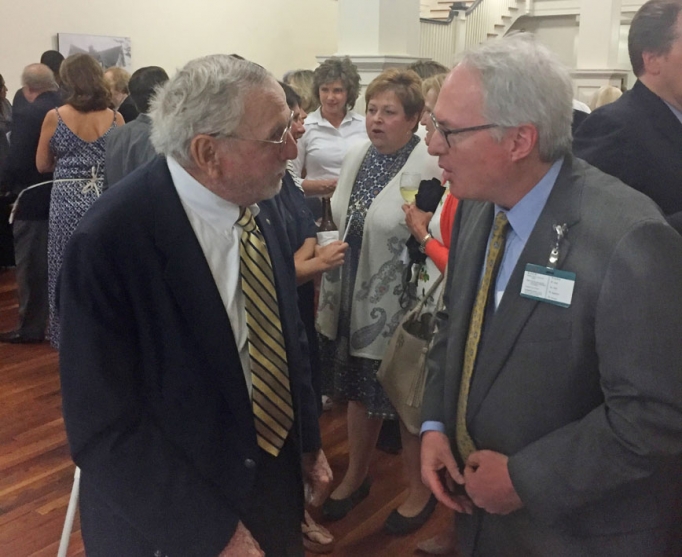 Rob Colones speaks with Bernie Moore, his Scout Leader and one of his mentors when he was growing up in Sumter during the 14th Annual Champions Tribute on August 31. During the event, Colones was named the 2017 Champion for Youth by the Boys & Girls Club of the Pee Dee Area.

Rob Colones, President and Chief Executive Officer of McLeod Health, was named the 2017 Champion For Youth by the Boys & Girls Club of the Pee Dee Area on August 31 during the 14th Annual Champions Tribute at The Waters Building in Florence.

During his remarks, Colones introduced his family and thanked them for their support throughout his career. He also reflected on some of his mentors who had a significant influence on his future as a business leader and philanthropist including his Scout Leader Bernie Moore who was in attendance.

Colones also recognized the Boys & Girls Club of the Pee Dee Area for what they do each day for the youth in the community. “The mission of the Boys & Girls Club is to inspire and enable so all of the young people in our community become productive and caring citizens. Their services to these students in after school programs is worthy of our support.”

The evening included a tribute video to Colones featuring his colleagues, mentors, family and friends who offered reflections and congratulatory messages. To view the video, click here.

Colones has been with McLeod Health for 36 years, serving in a variety of executive roles before beginning in his present position in 2002. He earned his undergraduate degrees in Business Administration Finance from the University of South Carolina and Hospital Administration from Park College. He also holds an MBA from Duke University Fuqua School of Business. He has served on the faculty and provided leadership for numerous academies, committees, and advisory boards for health care quality and improvement. He has also chaired the American Heart Association’s Pee Dee Heart Walk and served on the Leadership Advisory Panel to the Board of the United Way of Florence County.

In addition, Colones has served as a member of the Florence-Darlington Technical College Foundation Board and the Board for the Church at Sandhurst, where he also serves as an Elder. Colones received the Milliken Medal of Quality Award in 2002 and the Ashby P. Lowrimore Award in 2013. Colones resides in Florence with his wife, Deborah. They have three sons: John Thomas, Wil, and Stephen.

The annual tribute event supports Boys & Girls Club programs that help thousands of children throughout the Pee Dee grow into productive adults. The Boys & Girls Clubs serve youth every day after school and all day on non-school days and during the summer. Clubs provide a safe place where young people can learn and grow while helping them become productive citizens.