Radiation Advances in the Treatment of Breast Cancer 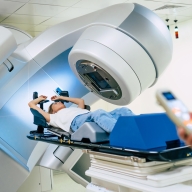 Advancements in radiation oncology are reducing the length of time a woman undergoes treatment for breast cancer as well as improving survival for those battling Stage IV disease.

Historically, a total mastectomy, which is a major surgery involving the removal of the entire breast and underlying tissue used to be the only option for patients diagnosed with breast cancer. However, the treatment paradigm has now shifted to performing a lumpectomy procedure, removing just the tumor, followed by radiation to the breast. This offers the same effectiveness in curing cancer as a total mastectomy based on multiple published studies.

This paradigm, which is called breast conservation treatment, has allowed women to preserve the cosmetic integrity of their breasts while also avoiding a major, potentially disfiguring surgery. Breast conservation has become the standard of care across the world with the vast majority of women undergoing a lumpectomy at initial diagnosis if they are eligible.

Most women who undergo a lumpectomy receive radiation to eradicate any microscopic cancer cells in the breast that remain after surgery. This significantly decreases the risk of recurrence of cancer within the breast.

Traditionally, post-lumpectomy radiation consisted of daily treatments Monday through Friday for a duration of five to seven weeks; however, thanks to multiple clinical trials, we now know there is no increased risk of recurrence in women who receive a shorter course of radiation. Today, many women with early-stage breast cancer can actually be treated with a technique called hypofractionated radiation therapy where we shorten the length of radiation treatment down to three to four weeks, making it more convenient for patients.

This technique has been made possible by advancements in technology that have refined our ability to deliver high doses of radiation to the tumor and avoid areas of normal tissue. By improving our ability to shape/mold radiation, we have been able to reduce the number of treatment sessions as we are able to safely give a higher dose per day. The total or effective biological dose remains unchanged, but we have drastically reduced the length of treatment down from 30 to 35 daily treatments to now 15 to 20 treatments routinely. For some patients with low-risk, early-stage breast cancer, with low-risk defined by various factors such as tumor size, hormone receptor status, grade, etc, we can even do as little as one week or five days of treatment, which is certainly more convenient for those who are traveling long distances.

For women with Stage IV disease, meaning cancer cells that originated in the breast have spread (metastasized) into distant organs such as the lung, bone, or brain, radiation was historically only used in a palliative sense to alleviate pain; however, there is growing evidence that targeted radiation to these sites of metastatic spread can offer not only symptom relief but can often increase the likelihood of remission or rendering cancer inactive, especially in women who have limited metastasis to five or fewer distant sites outside of the breast, which is termed oligometastasis.

We utilize a technique called SBRT, or stereotactic body radiotherapy to deliver high, ablative doses of radiation to areas of limited metastatic (i.e. oligometastatic) disease, generally in five or fewer treatment sessions, which is called oligometastasis-directed therapy. The growing body of evidence showing improved outcomes with oligometastasis-directed therapy highlights the idea that NOT all Stage IV diagnoses are the same and that some patients, particularly those with limited disease, can derive significant benefit from ablative radiation/SBRT.

There are multiple approaches to the treatment of breast cancer which can involve any combination of surgery plus or minus chemo/immunotherapy plus or minus radiation. In light of rapidly evolving treatment options, there is often no single universal formula for treatment as there is no identical patient, which highlights the importance of shared decision-making in cancer care with clinicians and patients working together to reach a consensus decision about treatment.

At McLeod, we are dedicated to ensuring patients are aware of all possible options so they can make sound, informed decisions about their care. We are also committed to offering the latest advancements in cancer technology to improve survival and access to care.