With Eosinophilic Esophagitis in Children, Diagnosis is Critical 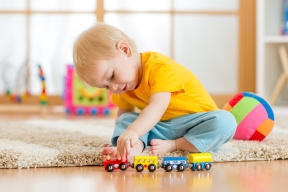 From an interview with
Dr. Chad Thornhill
McLeod Pediatric Gastroenterology

A relatively new phenomenon, eosinophilic esophagitis, or EoE, is an allergic condition that causes swelling or irritation in the esophagus. The esophagus is the tube that moves food from your mouth to your stomach.

EoE has only recently been identified as a disease because it shares many common symptoms with gastroesophageal reflux disease (GERD). As a result, this disease is often misdiagnosed. Approximately one in 10,000 people suffer from EoE, and while the exact cause is unknown, it appears to be related to food allergies. EoE can affect anyone, but males tend to be at a higher risk of developing the disease. There may also be a genetic component of EoE for some families. It is common for people with EoE to have other allergic diseases, such as asthma, allergic rhinitis or eczema.

Esophagitis results when the esophagus becomes irritated. With reflux, this is caused by the acid in the stomach coming up into the esophagus. With EoE, however, irritation occurs when white blood cells called eosinophils react to the food a child ingests and collect in the esophagus, causing damage in the lining of the esophagus.

Eosinophils are a special type of white blood cell, an important part of the immune system. They help fight off certain types of infections and are also involved in other conditions, such as allergies and asthma. Eosinophils can be present in different areas of the GI tract, but eosinophils in the esophagus are not common.

Symptoms of EoE vary, often depending on age. Young children may exhibit problems with eating, vomiting, stomach pain and poor weight gain. Older children and adults can experience reflux, chest pain, stomach pain and trouble swallowing. Symptoms can occur days or even weeks after eating a food allergen. They may also come and go, which can be confusing for patients.

Over time, the disease can cause the esophagus to narrow, which sometimes results in food becoming stuck in the esophagus, requiring emergency removal.

It is important to understand that EoE cannot be diagnosed by symptoms alone. It must be diagnosed through a test called an Upper Endoscopy, or EGD (esophagogastroduodenoscopy). During this procedure, the doctor looks directly into the esophagus, stomach and upper small intestine with a narrow bendable tube, mounted with a camera and a light. The doctor may also take very small tissue samples, or biopsies, of the esophagus to look for eosinophils. If the biopsies show 15 or more eosinophils, EoE is a possible diagnosis.

Fortunately, many new options are emerging to treat and manage the condition, primarily through medications and diet modifications.

A proper diagnosis is critical to determining the best treatment plan. One of the reasons this condition has been confused with reflux is that 30 percent of EoE patients improve with the same type of acid blockers used for reflux. However, 70 percent of patients do not improve. This is when your pediatric gastroenterologist will discuss other medications and work to identify specific foods causing the irritation.

EoE is a serious disease. If left undiagnosed and untreated, it can cause lifelong problems. If your child has any concerning symptoms, talk to your pediatrician to see if a consultation with a pediatric gastroenterologist is needed.