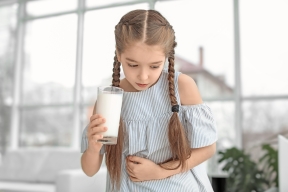 From an interview with
Dr. Chad Thornhill
McLeod Pediatric Gastroenterology

Physical reactions to certain foods are common. However, a food intolerance can cause some of the same signs and symptoms as a food allergy, so people often confuse the two.

Food intolerances cause unpleasant and frustrating symptoms like gastrointestinal distress, while the symptoms of food allergies are likely to be more severe and sometimes even life-threatening. McLeod pediatric gastroenterologist Dr. Chad Thornhill tells us more:

What is the difference between a food allergy and a food intolerance?

Food allergy is the classic thing. People typically think of the kid who ate a peanut, their face swells up, they can’t breathe. They’re throwing up and are quickly taken to the ER. Basically, their immune system is reacting to something in that food. Intolerances are all the other stuff. Intolerance is not necessarily where the immune system is reacting, and you’re having that very aggressive, very scary kind of reaction. Instead, you ate something that didn’t sit well with you. An example is lactose intolerance; you’re not digesting the lactose very well, so you don’t feel well. But your body’s not reacting to the lactose, and you’re not running to the ER. You don’t need an EpiPen.

It really depends. The immune system is a very complicated place. Sometimes kids outgrow allergies, sometimes they don’t. In my practice, we see a lot of infants with a milk protein allergy. Most of them outgrow those pretty quick. But there are two-year-olds who have a peanut allergy, they grow up, and they have the same peanut allergy at age 42. Intolerances are a little bit different. Sometimes that depends on what the person is eating and how well they’re eating it. But that usually isn’t something you outgrow.

What should a parent do if a child has an allergic reaction?

As a parent, it can be a really scary situation. When it’s happening, and you’re scared, the quickest thing you can do is give them a little bit of Benadryl and rush them to the ER. Hopefully, in a situation like that, especially with peanut allergies, if we’ve previously identified that condition beforehand, we’ve given you EpiPens so that, if you see a reaction like that, you can give them the EpiPen to help them get through the worst part of it.

Why do some children have such violent allergic reactions?

Once the immune system gets involved, all of the body systems come into play. So if your child’s skin starts reacting, they’ll have hives. If the respiratory system starts reacting, they’ll have wheezing and trouble breathing. If there is a GI tract reaction, they might vomit and have diarrhea. Everybody’s immune system is a little bit different, and some of it is dependent on how aggressively your immune system is going to react. You might be that person who ate a peanut 52 times which resulted in a little itchy mouth, and then that 53rd time is the time you’re rushing to an ER.

What types of allergy treatments are available?

Treatment-wise, if you’re in the midst of an attack, you might use antihistamines such as Benadryl. There are also EpiPens you can use. But the best treatment for allergies is just avoidance of the triggering food. If you know there’s a food you’re allergic to, you can avoid it. Intolerances are a little bit different, because if it’s a situation where you’re just not digesting things very well, there are all kinds of over-the-counter digestive enzymes you can take to help with symptoms.

Are there markers that can help us identify allergies early on?

Of course, infants can’t talk back to you, so how do you know when they’re not well? They may just continue to spit up their formula, so you have to have a high index of suspicion that this might be a thing that’s going on. Additionally, having a strong family history of allergies is something to always keep in the back of your mind.

To learn more, speak with a pediatrician near you.