ACL Tears – Repairing the Results of Plant and Pivots 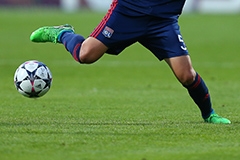 Many people associate the serious injury to the knee’s Anterior Cruciate Ligament (ACL) with the rough contact of football. That statement is half true. It is a serious injury but often not due to on-field contact.

“Most ACL harm results from a so-called plant and pivot injury,” says McLeod Orthopedic Specialist Thomas DiStefano, MD.  “The person lands with their foot stuck in a spot. They turn and their leg doesn’t go with them. Then, there’s the classic loud audible pop — very characteristic of an ACL tear.”

With an ACL injury, a person can’t put weight on the knee. It swells up and is very obvious. Occasionally, the damage may be subtle and appear to be nothing more than an unstable knee. An athlete should be carefully examined before they are allowed to go back on the field.

Surgery is needed to reconstruct the ligament, using a graft from the patient’s hamstring, tendon or material from a deceased donor. No matter what the source is, the body absorbs the graft and creates a new living ligament.

Through that process, the body absorbs the graft faster than it lays it down the new tissue for about three months. Then, the body starts creating a new tendon faster than absorbing the graft. That’s why it takes six months for the ligament to fully heal before athletes can resume pivot activities.

Until then, they can do straight ahead walking, jogging, running, biking or even swimming — but no pivot activities until after six months. Even at that point, the knee is weak, typically 65 percent strength. Overall healing usually takes about a year to get to 85 percent of function and strength and two years to fully and completely regain all your strength.

ACTION YOU CAN TAKE
If you hurt your knee in a plant-and-pivot injury, have an Orthopedic Specialist examine you before returning to the field or other activity.